While speaking about the Affordable Care Act from the White House's Rose Garden on Monday, President Barack Obama turned around to steady a pregnant woman who was about to faint. Karmel Allison, a type 1 diabetic who had been invited to the speech, swayed and looked around as the president held her arm and said, "I got you. You're OK." Not missing a beat, Obama then turned to the crowd and joked, "This is what happens when I talk too long." The woman took it in stride too, thanking the president on Twitter:

I'm ok world- just got a little lightheaded.Thanks, @BarackObama for catching me! And good thing this pregnant diabetic is pregnant :)

Obama's healthcare speech addressed some of the issues coming up since the rollout of Obamacare, including problems with a buggy healthcare.gov website that's become fodder for critics. "There's no sugar-coating it," he said, admitting that the site was too slow. "Nobody's more frustrated than I am." President Obama didn't say how or when the technical issues would be fixed, but private-sector IT experts are now helping with the site, and he made it clear that the site is a priority. "Nobody's madder than me about the fact that the website isn't working as well as it should," he said, "which means it's going to get fixed."

See the fainting episode go down in pictures after the break. 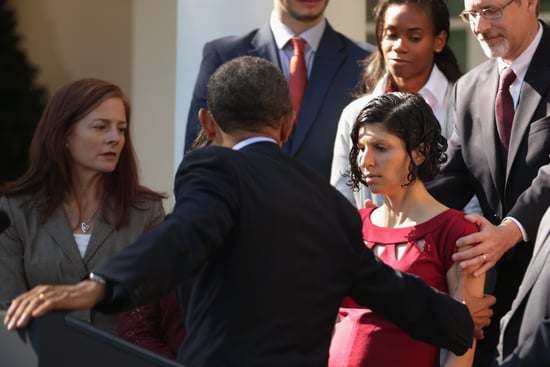