During an interview with the Today show, Prince Harry talked about the extreme weather conditions that have put his South Pole trek on hold, showing off some new facial hair ahead of the excursion. Prince Harry is part of Team UK, named Team Glenfiddich, for the Walking With the Wounded South Pole Allied Challenge. The group traveled from Cape Town, South Africa, to Novolazarevskaya Station in Antarctica last week to adjust to freezing temperatures, but extreme conditions have forced them to stay inside for part of their trip. Prince Harry told Today, "It's amazing how in six hours your morale can go from — I mean, it was pretty high. Almost, sort of, pouring over the edge. And suddenly, rock bottom." He added that while it's usually sunny with blue skies this time of year, the weather forecast seems to be getting worse.

Prince Harry's team isn't the only one affected by the conditions. Team USA, which includes Alexander Skarsgard, had to delay their trip from South Africa last week, eventually departing this past Friday. Still, despite what Prince Harry said, his morale doesn't seem to be too low, as he was busy laughing and making funny faces at the group on camera. He was also all smiles alongside actor Dominic West, a member of Team Commonwealth, while the pair checked kit weights for their trek. 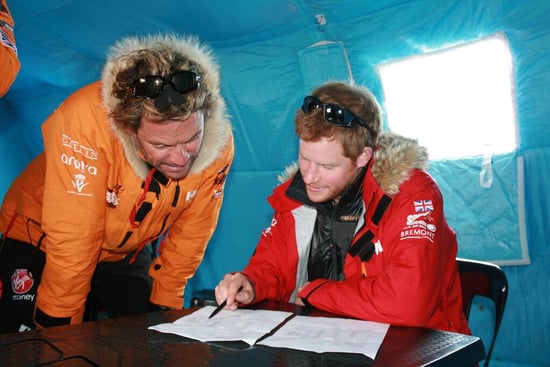