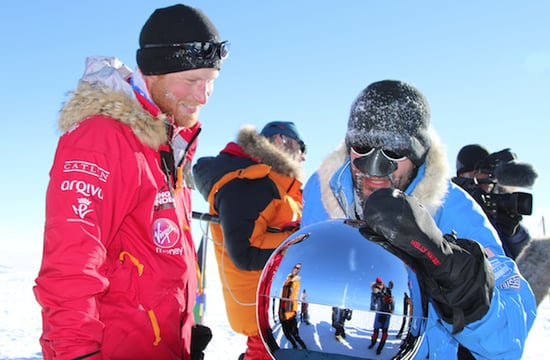 Prince Harry finally reached the South Pole on Friday! The royal showed off his scruffy red beard in a new snap alongside Team America member Ivan Castro. Harry joined a group of trekkers, including Alexander Skarsgard, who provided moral support to Team America, and actor Dominic West, who was part of Team Commonwealth. While Harry, Alexander, and Dominic's presence increased the journey's star power, the trek was really about the armed forces members who were all injured in conflict, many of whom lost limbs. After reaching his destination, Harry told reporters that he was very proud of the teams: "I'm so chuffed, and I'm so privileged to be here with all these guys and girls. What an amazing accomplishment. I think we'll be having a few whiskies tonight, and then everyone's looking forward to getting home."

The group's journey started in London, where they met with Harry's grandmother, Queen Elizabeth II, and then they flew to South Africa to meet with Alexander, who was wrapping up filming on The Giver. From there, the group flew to Novolazarevskaya Station, Antarctica, on Nov. 19, to begin training and adjust to the freezing temperatures. Unfortunately, even though it is technically Summer in Antarctica, the continent was experiencing its harshest recorded conditions, and the race portion of the 124-mile walk was called off on Dec. 7. However, the group was determined to still make it to the South Pole, and Harry revealed in a video blog earlier this week that they were all still in "high spirits" as they made their way towards the finish line.