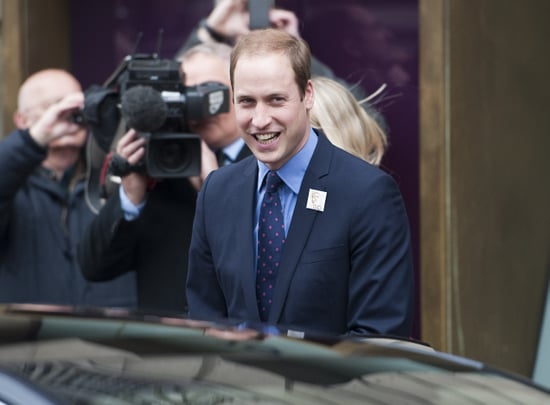 Both Prince William and Prince Harry are doing their part to give back this week, each of them stepping out to raise awareness for a cause. On Monday, the Duke of Cambridge visited the British Academy of Film and Television Arts headquarters in London to launch the Give Something Back campaign. BAFTA's initiative encourages film and TV professionals to share their insights and experiences with young people, organizing mentor programs, scholarships, and Summer internships. Speaking at the event, Prince William said, "Today more than ever, young people and career starters need nurture and support to achieve their potential and to succeed. This includes the chance to learn from and work side by side with the best in the business."

Meanwhile, his brother, Prince Harry, popped up in Cape Town, South Africa, ahead of his South Pole expedition. Last week, he made a Trafalgar Square appearance with the rest of the group who will be participating in the Walking With the Wounded South Pole Allied Challenge. Prince Harry will be joining wounded servicemen and women on Team UK (named Team Glenfiddich) for a 220-mile trek across Antarctica, competing against Dominic West and Alexander Skarsgard, who will be part of Team Commonwealth and Team USA, respectively. From Cape Town, the teams will travel to Novolazarevskaya Station, Antarctica, on Nov. 19, where they'll adjust to the freezing temperatures. On Nov. 30, all three teams will race the 220 miles, and they're expected to reach the finish line on Dec. 16.

The Royals
Happy Birthday, Archie! Harry and Meghan Celebrate With a Call to Action and a New Portrait
by Tori Crowther 8 hours ago