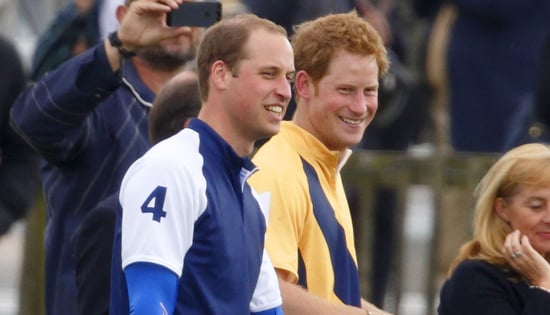 Prince William and Prince Harry reportedly didn't show any signs of nervousness when they played against each other in a polo match today. This day was long rumored to be Kate Middleton's due date, but neither the palace nor the royal couple themselves ever confirmed the actual birth date, instead saying that the baby is expected in "mid-July." William announced earlier this week that he would be playing in the charity match with his younger brother, which put an end to speculation that the due date was this weekend as the match was taking place nearly 100 miles away from Kate's current location in London. He will now allegedly head back to London as he wrapped up a series of shifts with his RAF Search and Rescue squadron in North Wales earlier this week.

Despite all the pressures of the royal baby, William reportedly played a good match against Harry, but the younger royal's team eventually emerged victorious with a 4-3 victory. An executive for the Tusk Trust, the African charity that William was playing for, said that the prince's visit at the match was "a lovely surprise," adding, "We weren't expecting William to be here. He was in really good form."

by Maggie Ryan 44 minutes ago