We were shocked when the news of Kate and Chris splitting came out earlier this week and now we all want answers. US is breaking the Owen factor and while we bet there will be denials later today from reps, we know in Hollywood many marriages end due to co-workers. Kate and Owen did seem to be having a blast while promoting their movie and they would look cute together but who knows what to believe right now. Stay tuned. Here's more from US: 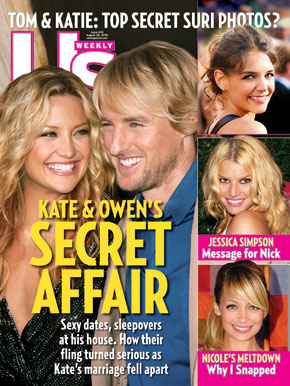 On August 14, Kate Hudson announced that she was separating from Chris Robinson, her husband of five and a half years. And though the actress, 27, and the Black Crowes singer (who have a son, Ryder, 2), were rumored to have been on the outs all summer – she never visited him during his current U.S. tour – multiple sources confirm to Us that Hudson’s burgeoning relationship with actor Owen Wilson was the main catalyst for the split.

(A rep for Hudson had no comment. A lawyer for Wilson tells Us in a statement, “[Anything] that suggests that the separation of Ms. Hudson was caused by Mr. Wilson…is absolutely false.”)

Meanwhile, sources tell Us that Hudson has spent several nights at her You, Me and Dupree costar’s Santa Monica, California, pad in the last few weeks. “This is not a fling,” says a source close to the couple. “Kate is crazy about him. Owen gives her so much attention, and she loves it. [That’s why] she wants her marriage to be over.”

Three days before the split, a Wilson source told Us, “Owen is not-so-secretly hoping she will leave Chris so they wouldn’t have to hide. He is falling for her.”