Music's leading ladies and more famous faces brought their best looks to the Grammys red carpet in LA tonight. Julianne Hough posed in a strapless Kaufman Franco gown while Alicia Keys chose a simple black dress and arrived on the arm of husband Swizz Beatz. Adele, who is nominated for six awards, wore a custom Giorgio Armani gown. She's taking the stage at this evening's show to perform for the first time since undergoing surgery to repair damaged vocal cords late last year. Fellow performer, Rihanna, brought the sexiness in a backless Armani number, which she helped design. 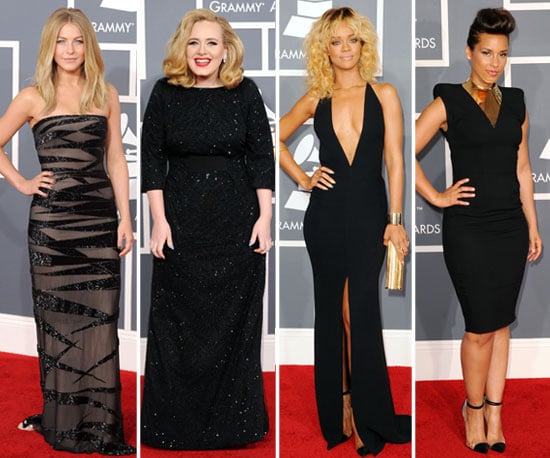 Neutrals were a big trend on the carpet with Kate Beckinsale stepping out in a cream Zuhair Murad mini and country star Miranda Lambert in a similarly hued lace Pivoni gown. Miranda joined her husband, Blake Shelton, on the carpet. Kelly Osbourne sparkled in Tony Ward with her light purple hair. Best country song and best country solo performance winner Taylor Swift rocked a high-neck Zuhair Murad as she awaits the news on her third nomination.

Nominee Carrie Underwood kept the sparkle coming in a long sleeve white gown by Gomez-Gracia. She'll hit the stage for a duet with Tony Bennett at tonight's show. Katy Perry, who is nominated for two Grammys, switched up her usually edgy appearance with a subtle blue Elie Saab that matched her bright hair, while Fergie showed skin in a hot orange lace Jean Paul Gaultier that revealed her black undergarments. Lady Antebellum's Hillary Scott brought a touch of color with her purple Monique Lhuillier gown.

There were more fashionable moments with Nicki Minaj stepping out in a dramatic Versace cape, and Malin Akerman wearing white, among others, so be sure to click through to see all the looks and make sure to vote on Fab and Bella's red carpet polls!

See ALL the Grammys red carpet ladies when you read more!

Taylor Swift
The Theories Were Right: Taylor Swift Is Dropping a Folklore Concert Film
by Kelsie Gibson 6 days ago