Country music stars came out in Nashville last night for the CMAs and to honor each other. Reese Witherspoon looked gorgeous out to present an award during the show, but she wasn't the only actress to grace the stage. Nicole Kidman took the stage too, but her first priority was supporting her performing and nominated husband Keith Urban. Jewel looked breezy in blue while Shania Twain made her first big appearance since splitting with her husband. Carrie Underwood walked the red carpet in yellow, but as hostess of the evening had a few dress changes throughout the night before taking home another CMA. While guys like Kid Rock may have dressed a little more country, it was all glam for the ladies on the red carpet. 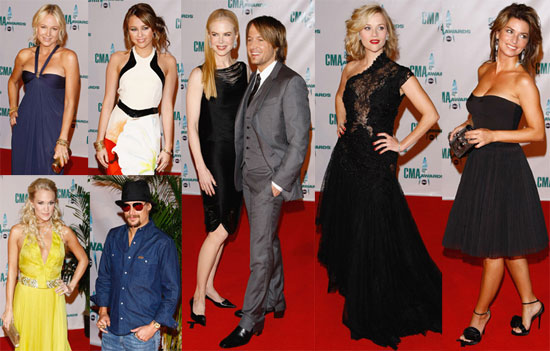