Rumors have been flying about Reese and Jake ever since we saw these pics of the two looking a little flirty on the set of Rendition last year. Yesterday our poll showed that you are just as excited about this pairing as we are. Now more details have emerged. According to People, the two have been dating for about two months and are taking things really slow. As much as they are avoiding the press, the two huge stars are hard to miss. An observer spied them "cuddling" and "looking playful" on March 23rd at Il Sole in LA. Here's more: 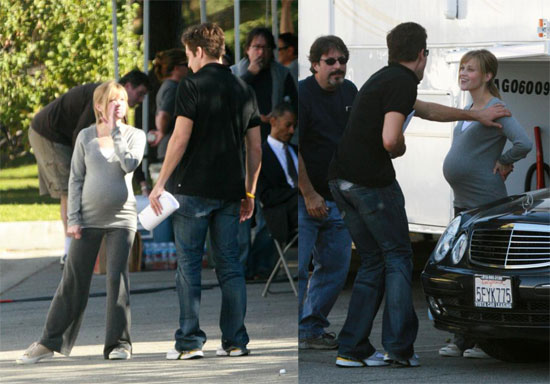 "In the last month, they've been spending a lot more time together," says a source close to Gyllenhaal, adding that the actor has even met up with Witherspoon, 31, and her kids – daughter Ava, 7, and son Deacon, 3 – in New York City. At 26, he is five years her junior, but "Jake really likes her and isn't at all concerned that she has two kids."

Gyllenhaal's rep had no comment. Witherspoon's rep did not return calls.

Still, Witherspoon isn't rushing into another high-profile Hollywood relationship, says a source close to the Oscar winner. "[Reese] is still very, very hurt by Ryan and it will take a long time to get over that," the source explains. "[But she and Jake] have a mutual interest. They are taking it slow and getting to know each other."

They're obviously pros at keeping the press from getting proof of their not-so-secret relationship. Who knows what they'll do to avoid being photographed together, but, we have a feeling they'll go public with it pretty soon.