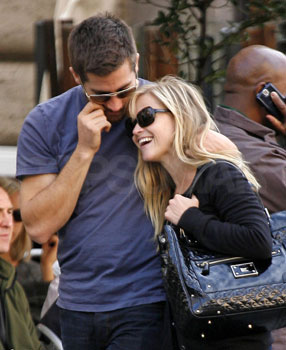 We don't have any details at the moment, but according to People Magazine, Reese Witherspoon and Jake Gyllenhaal have split up. The couple has been together for two and a half years and were rumored to have broken up before at the very start of their relationship. In October of 2007, they were spotted getting very romantic in Rome and since then they've been one of our favorite couples. We'll update with more information when we have it, but for now sad to hear that it didn't work out between Reese and Jake.

Update: According to both Jake and Reese's reps, the two have NOT split and are still together! We're so glad this turned out not to be true.

Celebrity Couples
Jason Momoa and Lisa Bonet Split After 17 Years Together: "We Are Parting Ways in Marriage"
by Chanel Vargas 5 days ago