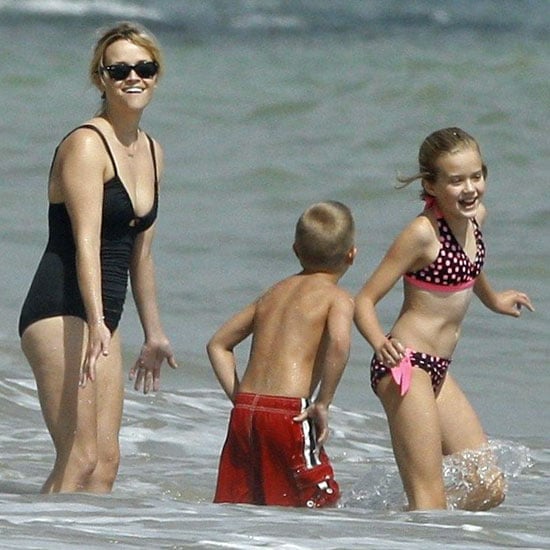 Reese Witherspoon slipped into a one-piece and kicked off her Fourth of July festivities yesterday with a swim in Malibu. She splashed around with her kids, Ava and Deacon Phillippe, and played on the beach with their French bulldog Coco. Jim got in on the fun too, tossing around a foam football with Deacon and later offering drinks to Reese and their friends. Later in the day Jim and Reese took two romantic walks on the beach. First the newlyweds were spotted walking hand in hand with Reese wearing a patriotic red, white, and blue ensemble while Jim broke out one of Matthew McConaughey's Just Keep Livin' t-shirts. Next the family of four changed into new outfits to watch a beautiful sunset. It's a repeat of holiday fun in Malibu for Reese, Jim, and the kids who partied with Sean Penn at his luxurious home last Summer. Hope everyone is having a safe and happy Fourth of July!

Celebrity Couples
Zendaya Gushes Over Tom Holland: "Even Though He's Not a Virgo, He Is a Perfectionist"
by Princess Gabbara 3 days ago

Cardi B
Wow, Cardi B's New Mansion Might Be the Most Epic Birthday Gift Anyone Has Ever Gotten
by Njera Perkins 2 days ago