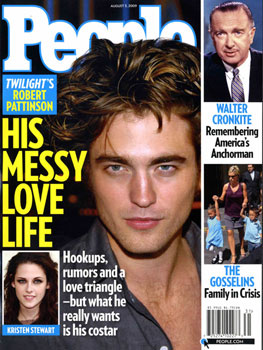 Robert Pattinson scored the cover of this week's issue of People, with a story about his "messy" personal life. Even though he and Kristen have been working on their separate projects on opposite sides of the country, apparently Rob still only has eyes for his Twilight costar.

Rob and Kristen have already garnered so much attention from their fans — find out the stories behind why some fans choose to get Twilight tattoos — and we're expecting the rumors to run wild again once they are reunited on the set of Eclipse.