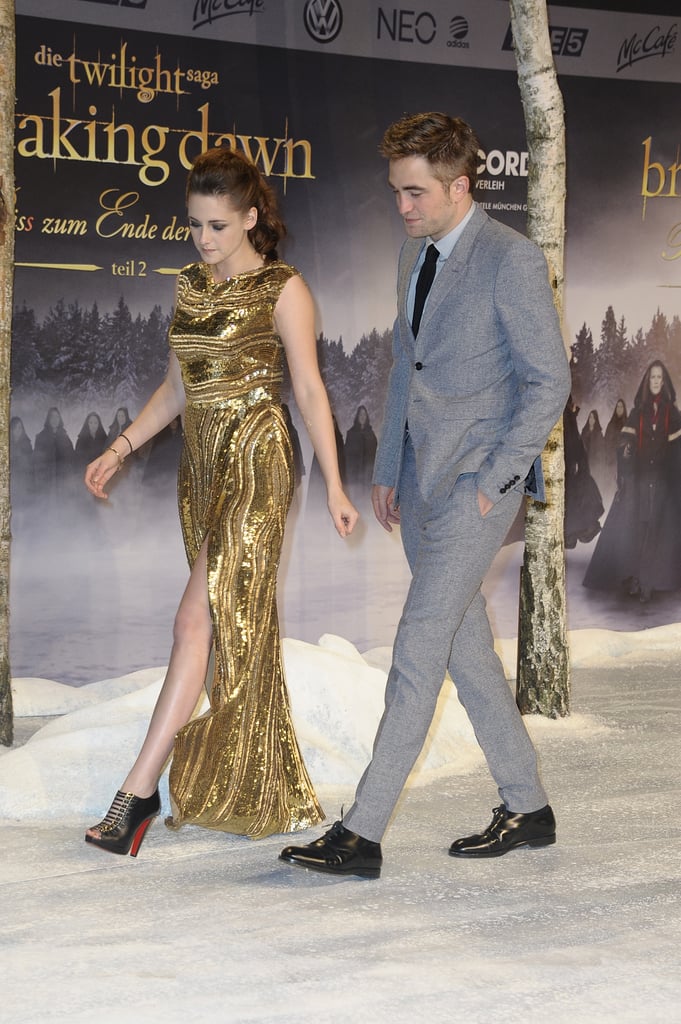 The Twilight trio, Robert Pattinson, Kristen Stewart, and Taylor Lautner, teamed up for a white-carpet arrival at the Berlin screening of Breaking Dawn Part 2 earlier today. Kristen sashayed into the theater wearing a gold gown by Elie Saab paired with strappy Christian Louboutin stilettos. It's the second metallic look we've seen her in this week, after wowing in a custom Zuhair Murad gown at Monday's LA premiere.

Rob, Kristen, and Taylor are saying farewell to fans around the globe, but back at home they're prepping to take the top spot at the box office this weekend. Early estimates suggest the fifth installment in the Twilight franchise will take in upward of $130 million during opening weekend, and they're off to a strong start with last night's midnight showings earning $30.4 million. Kristen's had great success at the box office in 2012, which could be just one of the many reasons she's reportedly close to signing a deal to star in Ben Affleck's next project. Kristen and Ben are both loosely attached to Focus, the story of a grifter who connects with a young woman and teaches her the ropes of conning.

Red Carpet
Shoniqua Shandai's Harlem NYC Premiere Look Is as Vibrant as Her Character Angie, Love to See It!
by Naledi Ushe 7 hours ago

Fashion News
Dua Lipa, Rochelle Humes, and More of the Best Dressed at the 2021 British Fashion Awards
by Kara Kia 4 days ago