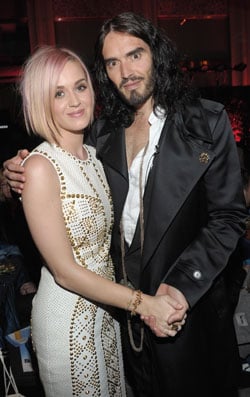 Russell Brand has filed to divorce Katy Perry in LA today citing irreconcilable differences. He confirmed the news in a statement, saying, "Sadly, Katy and I are ending our marriage. I'll always adore her and I know we'll remain friends." Katy was spotted without her wedding ring while vacationing in Hawaii on Christmas with friends. Meanwhile, Russell was also seen without his wedding band over the holidays in the UK.

Katy resumes touring Jan. 19 in Jakarta, and from there she moves on to Manila before returning to the States for the Feb. 12 Grammy Awards. Katy incorporated video from her top-secret Indian wedding to Brand during last year's Grammy performance while belting out a medley of her hits. She's once again nominated and will face off against Adele, Bon Iver, Bruno Mars, and Mumford & Sons for record of the year.

Ciara
Who Knew Russell Wilson Was Such a Poet? See His Sweet Birthday Surprise For Ciara
by Victoria Messina 5 hours ago