Sometimes the most absurd scenarios bring out the cutest reactions from our favorite stars. That was certainly the case when Ryan Reynolds appeared on El Hormiguero, a Spanish television show, in Madrid today. He got goofy with the host and other guests, throwing a pie in someone's face and mixing up cement. We've scoured all the photos from the eventful episode to round up Ryan's most endearing moments. That same day, Ryan made another, less dramatic stop at the Eurostars Hotel to celebrate the anniversary of Hugo Boss's Boss Bottled scent.

When Ryan smirks as the host gently wipes his face 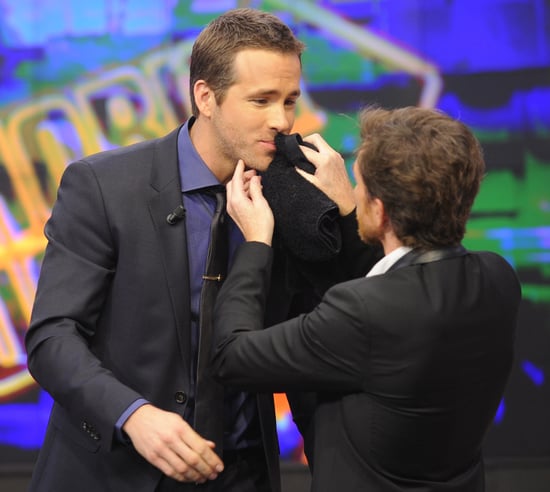 When Ryan's dreamy stare deepens as he touches the host

When the host jumps into Ryan's big arms

When Ryan throws a pie in a guy's face

When Ryan laughs after throwing a pie in a guy's face

When a man in a cape tells Ryan to pour water

When Ryan looks surprised by a bottle