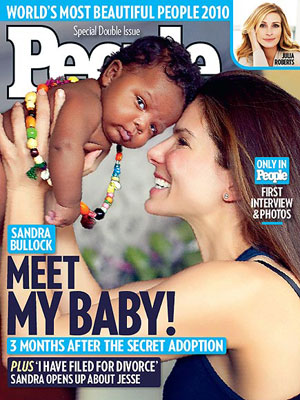 Sandra Bullock had two big stories to announce this morning — she's filing for divorce from her husband, Jesse James, in the wake of his cheating scandal, saying, "I'm sad and I'm scared." Sandra also is on the cover of People with the son they adopted and kept secret since January! Their baby, Louis Bardo Bullock, entered the family from New Orleans just before the Oscars, after Sandra and Jesse started adoption proceedings more than four years ago. She's now finalizing the process as a single parent. Sandra spoke about her child and said, "He's just perfect, I can't even describe him any other way. It's like he's always been a part of our lives." What a huge morning for Sandra, and congratulations on her beautiful son!

Nick Cannon
Nick Cannon's Youngest Son, Zen, Has Died From a Brain Tumor: "He Was Always Smiling"
by Chanel Vargas 17 hours ago