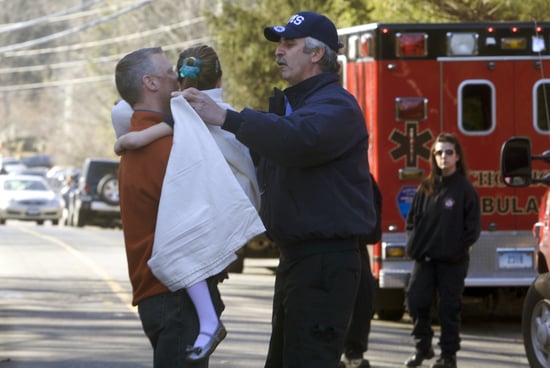 Parents of children at Sandy Hook Elementary School in Connecticut and all Americans are trying to make sense of a shooting this morning that left at least 26 people dead. As of last reports, 18 children died at the school, while two more passed away at the hospital. The school's principal and psychologist are also among the dead. At 9:40 a.m. this morning, police were alerted that a shooter was in the school. Details of what exactly happened are still being learned, but the news that is coming out of Connecticut is horrific; it's believed that the shooter's mother, Nancy Lanza, was a teacher at the school, and that he entered her classroom wearing a mask and bulletproof vest before he opened fire. The shooter's mother is presumed dead. Earlier reports identified the gunman as Ryan Lanza. But law enforcement officials have since named Adam Lanza as the gunman, who is now dead, and said that his brother, Ryan Lanza has been questioned.

A student told NBC: "I was in the gym and I heard like seven loud booms and the gym teachers told us to go in the corner and we huddled. We all heard these booming noises and we started crying. So the gym teachers told us to go into the office where no one could find us. Then a police officer told us to run outside." While we don't know everything yet, it's clear that this will be among the worst mass shootings in US history.

As for whether this should start a gun control discussion, White House Press Secretary Jay Carney said this morning: "There is, I am sure — will be, rather — a day for discussion of the usual Washington policy debates, but I do not think today is that day." But in his tearful remarks today, President Obama said there needs to be a meaningful change regardless of politics. He said, "We've endured too many of these tragedies these last few years."

Breaking news
Just Moments Before the Chauvin Verdict, a 16-Year-Old Black Girl Was Shot by a Cop
by Yerin Kim 4/20

Politics
I'm a Coloradan, and I'm Enraged We're Witnessing Another Mass Shooting in My State
by Kathryn Mayer 3/24