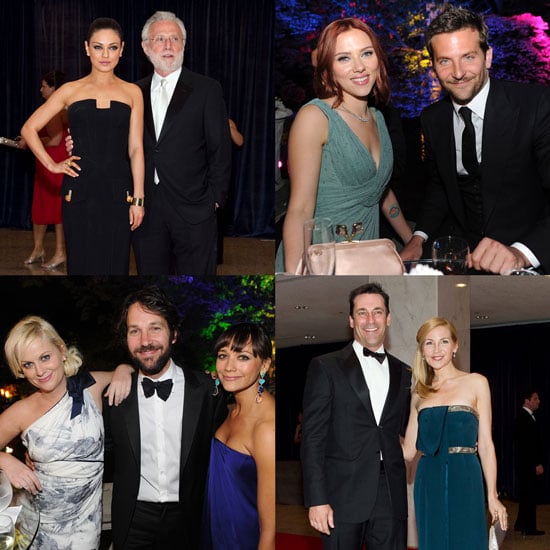 The annual White House Correspondents' Dinner brought celebrities and the media stars who love them to the White House in Washington DC on Saturday night. Scarlett Johansson and Sean Penn were inseparable after the event, but she first walked the red carpet with her brother Hunter. Other couples were more comfortable posing before the cameras, with Jon Hamm cozying up to Jennifer Westfeldt, Anna Paquin and Stephen Moyer sticking together, and Paul Rudd making the rounds with wife Julie when not chilling with Parks and Recreation funny girls Amy Poehler and Rashida Jones. Salma Hayek also had her husband Francois-Henri Pinault on hand, and Chace Crawford tagged along with sister Candice and her fiancé Tony Romo. The Vampire Diaries duo Nina Dobrev and Ian Somerhalder made the rounds, as Mila Kunis made one half of an interesting pair with CNN's Wolf Blitzer. Seth Meyers was the evening's emcee, but it was President Obama who stole the show. The president hit back at critics like Donald Trump and even Matt Damon, who recently expressed disappointment with the administration. Obama said of Damon, "I've even let down my key core constituency: movie stars. Just the other day, Matt Damon — I love Matt Damon, love the guy —  Matt Damon said he was disappointed in my performance. Well, Matt, I just saw The Adjustment Bureau, so. . . .right back atcha, buddy."

Nostalgia
You Know You Love It: Penn Badgley and Chace Crawford Reunite and Reflect on Gossip Girl
by Kelsie Gibson 3 days ago