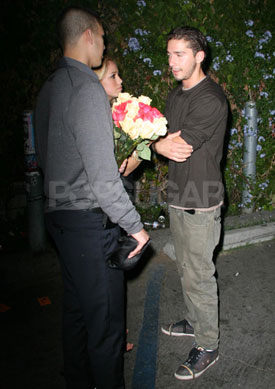 Shia LaBeouf was unfortunately still thinking that slicked back hair was a good look for a night out on the town at Les Deux over the weekend. We guess it was only a matter of time before super serious Shia decided to loosen up a little and start hitting the club scene and apparently it didn't take him very long to get the hang of it. Us Weekly reports that Shia loved getting recognized and was dancing and making out by the end of the night, even though he was overheard saying, "I’m relatively new to the scene” but was ready “to party” and "chat with ladies." Sounds like Shia got the memo that he's almost at Manjoyment status. We just hope he doesn't sell himself too short — we all know that there are plenty of party girls that wouldn't exactly be the best influence on him.