Zac Efron showed off his sculpted abs on set of The Death and Life of Charlie St. Cloud in Canada on Friday. He chased a flock of geese with trashcan tops and dropped down for push-ups while filming his latest movie. Vanessa Hudgens is also in Vancouver, staying occupied by shopping with Twilighters while her boyfriend works. Zac didn't make it past the second round of our Hottest Shirtless Guy contest, which is down to the Final Four, but it already looks like he's going to be stiff competition next year. 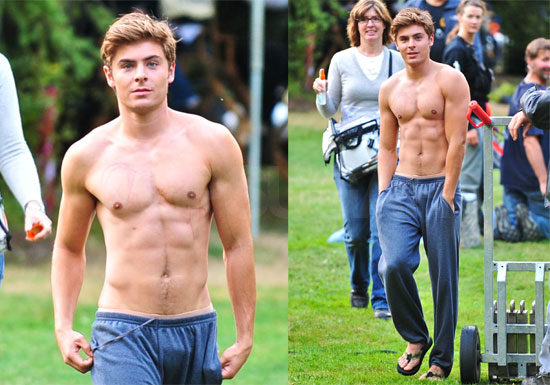 Zac Efron
All the Spoilers From the "Firestarter" Remake
by Hedy Phillips 5/13
Michael B. Jordan
Indulge in Photos of Jonathan Majors and Michael B. Jordan Filming "Creed III"
by Perri Konecky 3/30

Shirtless
Presenting the Sexiest Celebrity Selfies of 2021 — So Far!
by Monica Sisavat 4/12/21