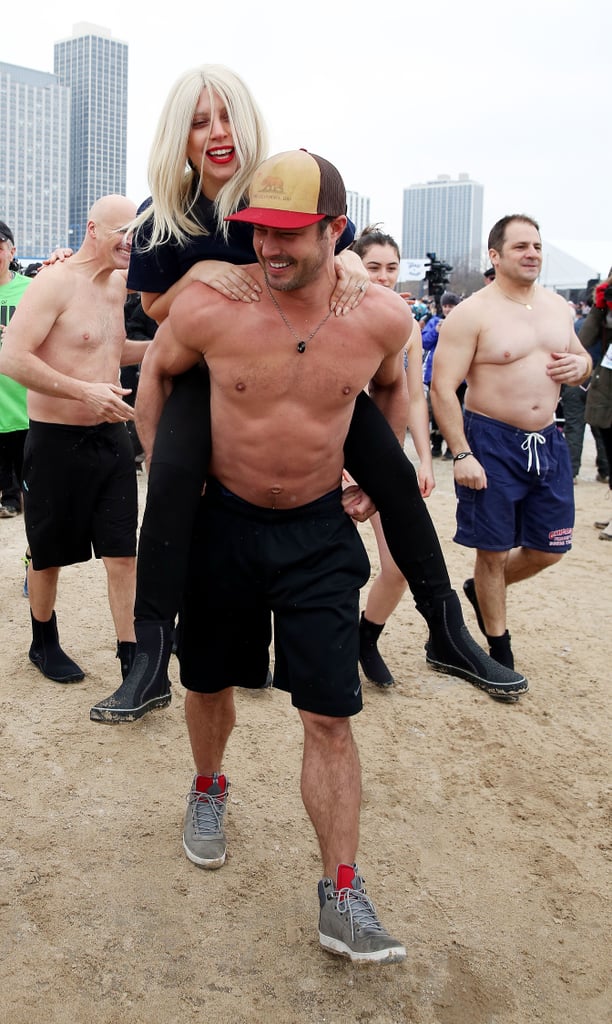 Just because Lady Gaga and Taylor Kinney are settling down doesn't mean the singer and actor are losing their sense of adventure. On Sunday, the duo took part in Chicago's Polar Plunge, jumping into icy Lake Michigan with several people, including Vince Vaughn. Not only did the event raise money for Special Olympics, but it also gave us a high dose of eye candy. Taylor, whose physique can be seen on NBC's Chicago Fire, was shirtless upon arrival. Even better: the actor's muscles were bulging as he carried Lady Gaga on the beach and goofed around with pals in a manly wrestling match. Although you wouldn't expect glamour at such an event, Lady Gaga's red lipstick looked perfect even as ice stuck to her hair.

The charitable day marks yet another memory to add to Lady Gaga and Taylor's most adorable moments. On Valentine's Day, Taylor asked for Mother Monster's hand in marriage, presenting her with a heart-shaped engagement ring she couldn't help but gush about on Instagram. One week later, Lady Gaga stole the spotlight during her awesome Oscars night, delivering an epic medley of songs from The Sound of Music. To top it all off, she surprised American Horror Story fans this week by announcing her plans to star in the show's fifth season. Read on to see pictures and video of the hot couple at the Polar Plunge, and if you can't get enough of Taylor's body, feast your eyes on his sexiest moments.