Paris Hilton has been a friend to the slapped together by children heinous avant-garde design team Heatherette for years, but that certainly doesn't mean that she'll pull through in the clutch for her buddies. The heiress was scheduled to appear at the Heatherette runway show yesterday evening (which sounds like it went just swimmingly), but declined to show up, citing a stomach flu. You know, that special type of flu that comes the day after 3AM tequila shots. Paris was out until the wee small hours of the morning with very much on-again boyfriend Stavros Niarchos, and just wasn't feeling up for the runway the next morning. As you can see, she may have been less-than sober. 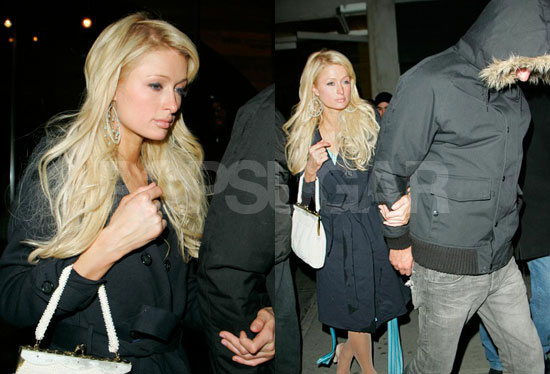 Hey, I'm just surprised the fashion line, though known for shoving controversial pieces down the runway, would still want to associate with Paris considering everything that has recently come to light about the girl.

Paris Hilton
Paris Hilton Debunks the "Stop Being Poor" Tank Top — That's Not What It Actually Said!
by Nikita Charuza 6 days ago