A private burial service was held Sunday for Aaron Spelling. While Tori was reportedly there, People did not include Dean on that list. Also, a released statement from the family did not include Tori. Something weird is going on but at least everyone agrees on one thing - Aaron will be a very missed man. Here's more: 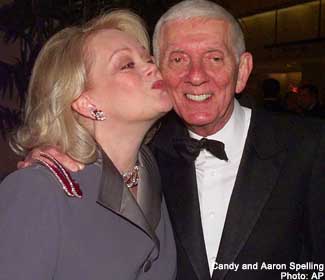 "Our extreme sadness and grief is comforted by the overwhelming number of heartfelt calls we have received," Candy and Randy Spelling said in a statement released earlier by Sasaki. "We are truly grateful for the outpouring of love and sympathy expressed by so many friends and colleagues who knew Aaron. Our family is truly appreciative of everyone's love and support."

As for the rumored Candy affair, Page Six reports that Candy's good friend Mark Nathanson is just that and nothing more. To see what Tori and Heather had to say, read more

Tori has her own statement when her father passed on. She said:

Spelling's actress daughter Tori made peace with her father before his death. "I'm grateful I recently had the opportunity to reconcile with my father," she told PEOPLE, "and most grateful we had the chance to tell each other we loved one another before he passed away.

"It's a true blessing to have had a parent that loved me unconditionally. He had a heart as big as his talent and today, along with many others, I mourn his loss. He was a great man and even better father."

While Tori may have tried to clear the air, it was Heather Locklear who was his "lucky penny."

Heather Locklear, whose mid-series casting in Spelling's Melrose Place gave the show renewed buzz, said Monday she was sad to hear of Spelling's death. "He called me his lucky penny," she said, "but I am the lucky one because he graced me with his encouragement and talent."