Heidi Montag and Spencer Pratt were embroiled in lots of drama on last night's episode of The Hills, and this morning they chatted with us about their relationship, plans for the future, and how much fun they have together. They also denied upcoming wedding plans — more on that soon! Love them or hate them, Heidi and Spencer are equal-opportunity appreciators of all their fans, followers, and even haters. It's hard to disparage their happy attitude and genuine thankfulness for everything The Hills has given them over the past few years. There will be more from the interview coming up, but for now here's some of the highlights: 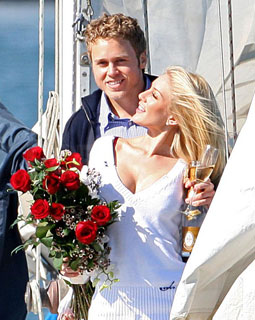 To see what he has to say about life after The Hills and their love for Twitter, just read more.

Lots more to come from Heidi and Spencer including details about their album. Whatever your feelings are toward the publicity-loving couple, they're certainly good sports and more than willing to play along. We know you have strong feelings toward these two, so anonymous comments are open in this post!