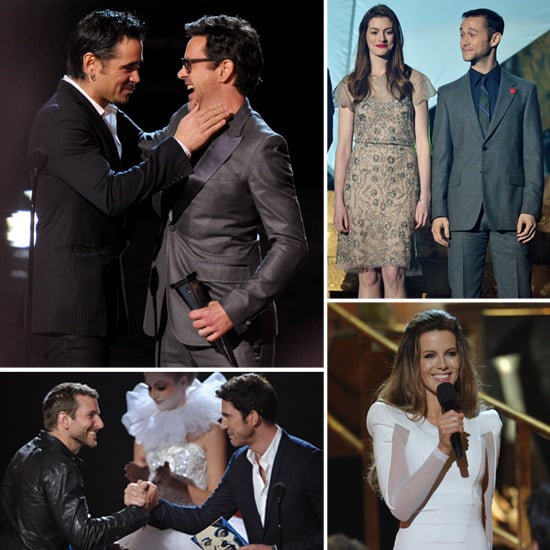 This year's scariest films were honored in LA last night at the sixth annual Spike TV Scream Awards. Top prizes went to Harry Potter and the Deathly Hallows: Part 2 taking home six wins — get the entire list of Scream Awards winners here! Daniel Radcliffe couldn't make it to the show, which airs Tuesday night at 9 p.m., but he did join the fun via telecast to accept his statue for ultimate scream. Other winners included Black Swan's Darren Aronofsky for best director and Natalie Portman for fantasy actress. Bradley Cooper was still smiling from his date with Jennifer Lopez while accepting a statue for Limitless, and newcomer Chloë Moretz was triumphant in best horror actress for her haunting role in Let Me In. It was a big night for fan favorite True Blood, which scored top billing in the best ensemble category with hunks Joe Manganiello and Alexander Skarsgard taking home individual trophies. Colin Farrell presented Robert Downey Jr. with the hero award, and The Dark Knight Rises cast Anne Hathaway, Gary Oldham, and Joseph Gordon-Levitt took a break from filming to accept the most anticipated movie statue. Other hot actors and actresses handed out awards including Zoe Saldana, Kate Beckinsale, and Dylan Mcdermott while Nicolas Cage made a grand entrance to debut an exclusive world premiere clip of his upcoming Ghost Rider Spirit of Vengeance.