Lindsay has been spending some time with strippers while learning how to pole dance for her latest role in I Know Who Killed Me. This week she sent out an email calling the ladies she was working with whores, yet saying she has a lot of respect for them. But evidently the strippers who have seen LL dance aren't too impressed by her moves. Page Six reports: 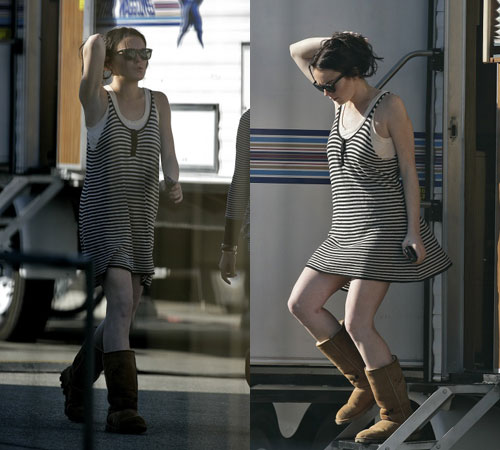 The strippers at Scores East Side were surprised to read on Page Six yesterday that Lindsay Lohan was sore from pole dancing to prepare for her topless role in "I Know Who Killed Me." They were amazed she even got the part. When Lohan worked the pole there one night with Kate Moss 11 months ago, "she was very awkward," recalls Kim (a 5-foot-10, 36C-24-35 brunette), "although she did look like she was having a good time." Angelica (blonde, 36DD-25-36) agreed that Lohan seemed klutzy, as did Maria (blonde, 34C-23-33), who opined, "I give her credit for getting up there."

You've gotta admit though that the strippers were a little nicer in their criticism of LL than she was in giving them props! Still, being terrible at stripping isn't necessarily a bad thing, right? For more pics just read more