It's quite the day for gentlemen protecting their ladyfolk, isn't it? First we talked about Jay-Z/Rihanna, then there was Nick's display for Vanessa and now we've got Pete getting physical to defend Ashlee! Over the weekend, Pete was in his hometown of Chicago on tour with Fall Out Boy and decided to play a few acoustic tunes at his after party. Afterwards, a crowd member was heckling Pete about Ash, which infuriated Pete enough to retaliate with violence (photos of the bloody aftermath here). Today, after this story got out, Pete sent this response to MTV: 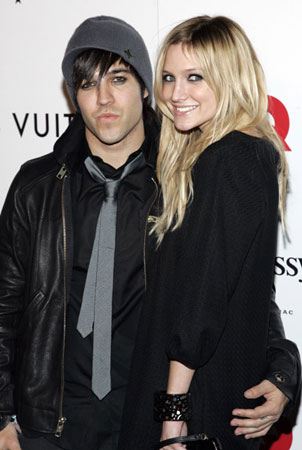 "Yes, the guy was heckling me and the band, so were other people, most in good fun. But we get heckled onstage all the time, and while I'm a jerk, I'm not the kind of person who would ever lash out at someone simply over this. I mean I'm not as big as Akon and haven't written as many good songs. The truth is on the way out the door I had to pass directly next to the guy and I knew it, so I kept my head down and walked out. As I did, the guy reached out and grabbed me and said something I couldn't really hear — it was a glorious use of the English language, though. As he grabbed me, I punched him. Yell all you want at me, say whatever, but in a situation like that I will defend myself. After that, of course, it got chaotic, [but] we have several independent witnesses that gave statements saying he grabbed me first ... I am not worried over the outcome, as I was clearly in the right. Anything anyone else is saying or writing is simply not true."

Come on, Pete. Don't you know that violence is never the answer!