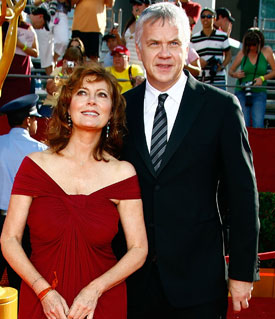 Apparently there's one more to add to the shocking breakups of 2009 — Susan Sarandon and Tim Robbins announced their split after 23 years together. Her rep confirmed that the two parted ways over the Summer. Susan has been out doing press for The Lovely Bones where we noticed that she avoided questions about her longtime relationship. Susan and Tim have two sons who are 17 and 20, and she has an older daughter Eva who starred on this season of Californication. We're always sad to hear about the end of such a committed pair, especially when they've been together for so long.

The Bachelorette
Clare Crawley Speaks Out After Dale Moss Breakup: "I Am Crushed"
by Yerin Kim 1/19
Celebrity News
Ana de Armas and Ben Affleck Reportedly Split: "Their Relationship Was Complicated"
by Chanel Vargas 1/18

Celebrity Couples
Before Michael B. Jordan, Lori Harvey Was Linked to These Famous Men
by Monica Sisavat 1/12