ABC was the last big network at the TCAs, but it kicked off the morning with a big one — the cast of Lost. Josh Holloway, Evangeline Lily, a Robert Pattinson-gushing Emilie de Ravin, and several other members of the cast gathered together to reminisce about their last season together. Matthew Fox missed the panel, while his costars talked about their favorite scenes over the years together, and how we might feel about the finale — read more about what they shared here. We also checked out The Deep End, a new drama about young, hot lawyers, including True Blood's Mehcad Brooks, who many of you want to see more of in 2010. 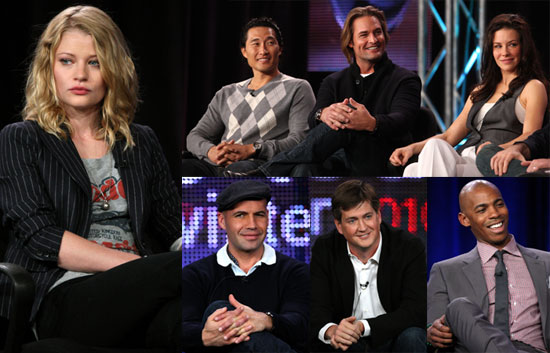 Bill Lawrence and a few of ABC's other comedy writers hit the stage in the afternoon, fresh off the news that their shows were picked up for a second season. They kept the critics laughing through the afternoon talking about the long life of Scrubs, the Conan and Jay mess, and even a few Friends. When asked about following up Lisa Kudrow's appearance on Cougar Town with more of Courteney Cox's friends, Bill said, "Jennifer Aniston is coming on the show, she is not aware of that yet."

Lots more photos from the TCAs, so read more.