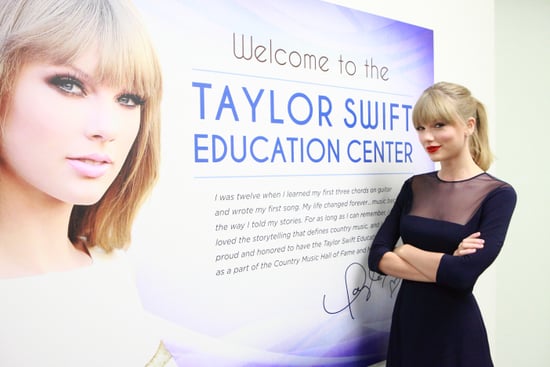 Taylor Swift hit a major milestone when she opened the Taylor Swift Education Center at the Country Music Hall of Fame and Museum in Nashville, TN, on Saturday night. The singer did the honors of cutting the red ribbon at the space, which boasts three classrooms, a learning lab, a design studio, and a state-of-the-art children's exhibit gallery. Taylor posed with museum directors as well as a group of students from a nearby high school. Her $4 million gift to endow the center is the largest individual artist donation in the Hall of Fame's history. Taylor has had a close relationship with the Country Music Hall of Fame since signing her record contract there as a teenager. She gave one of her first public performances there and has volunteered at and donated to the museum several times over the years.

It's been a big week for Taylor, as it was also announced that she's nominated for five American Music Awards, including artist of the year. She'll be going head-to-head with Justin Timberlake, Macklemore & Ryan Lewis, Rihanna, and Bruno Mars for the award, which she's taken home twice in past years. Taylor also graces the cover of InStyle's November issue, where she opened up about her love life, her haters, and her recent penchant for bad boys. In the interview, Taylor said, "If someone seems bad or shady or like they have a secret, I find them incredibly interesting. That's just a phase I've been in lately. I don't think this should be how I proceed in life."

Taylor Swift
Taylor Swift Gives a Sneak Peek of Her "Love Story" Rerecording, and OMG, the Vocals
by Kelsie Gibson 2 days ago

Taylor Swift
The Theories Were Right: Taylor Swift Is Dropping a Folklore Concert Film
by Kelsie Gibson 1 week ago