OK we hope and think this will be our last post on the Teen Choice Awards but think about it this way, if this is what we do for the Teen Choice Awards, what are the Oscars gonna be like? Check out the many leftover pics of the stars backstage, in the swag room and more. As for the most important question of the night, did Nick and Jessica run into each other? Apparently not. People reports: 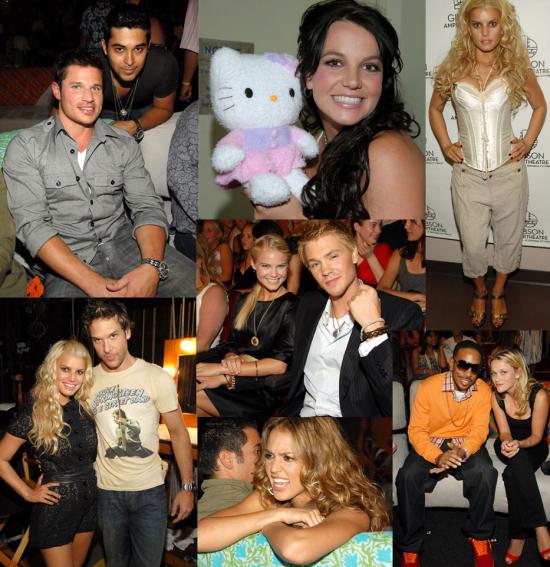 Before the ceremony, Simpson and Lachey managed to steer clear of each other on the red carpet, as well. Simpson, who made her appearance around 4:15 p.m., trotted around with her mom Tina and hairstylist Ken Paves, who shouted "We Love You Jessica" behind her on the carpet.

Lachey, with only his publicist in tow, did not appear on the carpet until 45 minutes later – just minutes before the live broadcast began.

Lachey also missed the first portion of the show, during which Simpson and Cook joked about their rumored romance. Cook then asked Jessica if there were anyone in the audience who could serve as her background reference. The camera flashed to an empty seat in the VIP area – one that, presumably, was intended to be filled by Lachey.

Once in the audience, Lachey sat front and center, next to Jessica Alba and her boyfriend Cash Warren, where he remained until he was presented with the choice song award for his single, "What's Left of Me." During his acceptance, a clip from his music video ran, showing girlfriend Vanessa Minillo.

Lots and lots of fun pics so read more