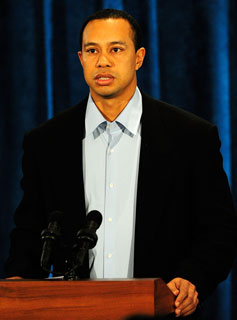 This morning Tiger addressed the world to apologize for his actions. He said he is working on gaining forgiveness from Elin and his family through his actions and not publicly in the press. He looked up from his script to his fans, reporters, and audience and said he was so sorry. He denied Elin ever hit him, and said that she has shown nothing but grace and poise. He admitted he had affairs and that he cheated and what he did was not acceptable. Tiger said only he was to blame. His mom was in the front row to support him, but Elin was nowhere in sight. Tiger spent more than 10 minutes addressing the press to apologize and let us know he did not know when he would return to golf. Tell us, do you accept Tiger's apology?