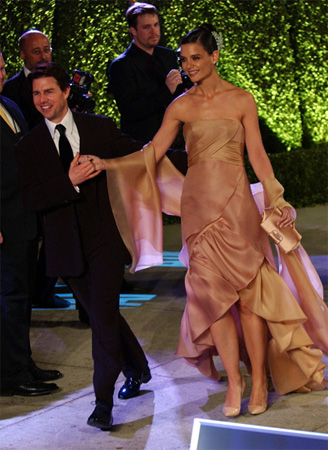 Even though these days Katie Holmes is best known as Tom Cruise's wife (and Suri's Mom, obvs), she's looking to get back to that acting thing that made her famous in the first place. Don't get to thinking, though, that Tom will let his beautiful young bride pick just any movie -- oh no, there will be no love scenes for Mrs. Cruise. After appearing in 2004's Batman Begins Katie reportedly gave up her role in the sequel, thanks in no small part to Tom's urging, in order to make Mad Money a female buddy movie co-starring Queen Latifah and Diane Keaton. Now, rumor has it that he called the Mad Money producers to tell them that he's planning on being on set every day that she's working on the film. Overbearing or adorably involved? You decide. Well, at least she has her (still entirely speculation-based) budding clothing design career!