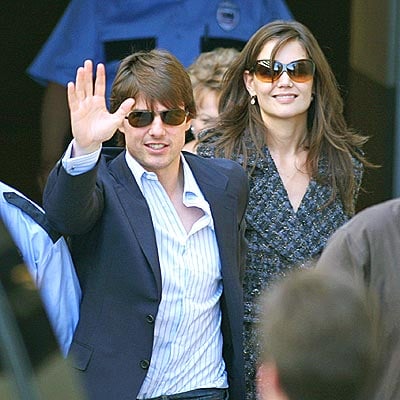 Tom Turning Around his Image?

Tom Cruise is saying he's sorry to Brooke Shields after he bashed her for using antidepressants following her daughter's birth... well, sorta. Tom's colleague says that he "deeply regrets" what he said. It's nice timing - Tom is trying to turn around his image just as he was dumped by Paramount. We now hear that Steven Spielberg was completely shocked when he heard Paramount broke things off with Tom. People reports: Producer Kennedy tells the Daily News that Spielberg had not, as was rumored last year, been upset by Cruise's actions while promoting War. "It's not true," she says. "(Tom) was a consummate professional. He's done nothing wrong."

Spielberg, head of Paramount-owned DreamWorks, was blindsided by Wednesday's announcement, his rep, Marvin Levy, says. "The story broke when Steven was on an airplane. He found out when the plane landed," Levy tells the Daily News. The director "had no advance knowledge of Sumner Redstone's position," Levy also said.

Adding to the chorus of voices weighing in on the Cruise-Paramount split, producer Jerry Bruckheimer tells the paper, "(Redstone) has the right to say what he wants," adding, "It's not what I would do."

We are sure this isn't the end of Tom's drama. In the meantime, lots more pics of Tom and Katie in Santa Monica together so read more