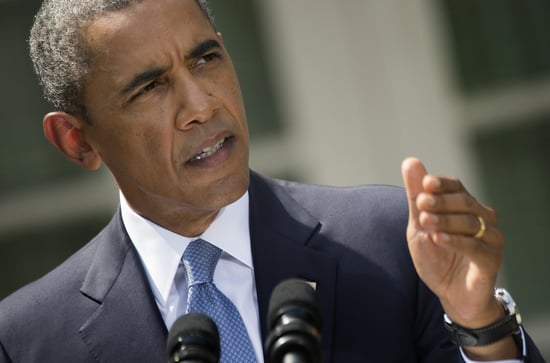 "I have decided that the US should take military action," President Barack Obama said Saturday in the White House Rose Garden. But before that happens, Obama is seeking the approval of Congress. He announced the extraordinary step explaining, "I'm the president of the world's oldest constitutional democracy," and although he doesn't need approval, Obama claimed, the debate will make the country stronger.

On Friday, Secretary of State John Kerry also laid out the US case for taking action in Syria after the regime of Bashar al-Assad allegedly used chemical weapons that, according to Kerry, recently killed 1,429 Syrians, including 426 children. While attempting to persuade the American public, Kerry disclosed the limitations to the military action, saying it would "not involve boots on the ground," nor be open-ended. President Obama has also repeatedly said the action would be "limited." Since there is a chance Obama will lose the battle in Congress, today he did his best to appeal to lawmakers and the American people, asking: "What message will we send if a dictator can gas hundreds of children in plain sight?"

Why now? Syria has been involved in a bloody civil war for more than two years, and an estimated 100,000 people have died. So far, other countries have mostly stayed out of it, but the recent alleged chemical attacks are changing the tune of international observers. Friday, Kerry called Assad a "thug" and "murderer" and said, if we do not stop a man who gassed thousands of his own people, "there will be no end" to such horrors. On Saturday, Obama appealed to Americans by saying: "We are the United States of America. We cannot and must not turn a blind eye."

A US missile strike would show America is as good as its word. President Obama has long said the use of chemical weapons is a clear "red line" America will not allow countries to cross. In his Wednesday night interview with the PBS NewsHour, posted below, Obama explained it has always been clear that "if the Assad regime used chemical weapons on his own people that would change some of our calculations." Syria has one of the largest stockpiles of chemical weapons and, according to Obama, "we cannot see a breach of the nonproliferation norm that allows potentially chemical weapons to fall into the hands of all kinds of folks."

What's the evidence? The Obama administration released unclassified documents Friday, detailing evidence that Assad used chemical weapons. And following the alleged attacks last week, Doctors Without Borders reported that thousands of people flooded the hospital suffering neurotoxic symptoms consistent with exposure to chemical weapons. The Assad regime denied responsibility. UN weapons inspectors were on the ground, investigating sites of the alleged attacks, after Assad agreed to allow them in. However, they left a day early on Saturday, raising suspicions that an attack would come soon after.

Will this be another Iraq? Keep reading to find out. On Saturday, Obama conceded that he "was elected in part to end" the Iraq War and that "we're not contemplating putting our troops in the middle of someone else's war." On Friday, Kerry said the intelligence community is "more than mindful of the Iraq experience" and that America will "not repeat that moment." Presumably avoiding "boots on the ground" is one such way to do so. The American people certainly worry about another protracted war in the Middle East. Almost 80 percent want congressional approval, and 50 percent support very limited action. A potential strike does have something in common with Iraq: a lack of support by the UN Security Council. Saturday, Obama said he was comfortable going forward without the approval of a Security Council that has been paralyzed. Last Wednesday, the five permanent members failed to reach a resolution, as both China and Russia, which trade with Syria, have allied with Assad's regime.

The US is joined by a decent list of supporters for military action, which includes France, which Kerry called America's "oldest ally"; Turkey; Saudi Arabia; the United Arab Emirates; and Qatar. However, support from the UK hit a snag Friday when parliament voted against joining a potential US intervention. Meanwhile, Israel is treading lightly, as it fears a reprisal attack from neighbor Syria, and the Israeli government is distributing gas masks to families.

What will the US actually do? On Saturday, Obama said military action "will be effective tomorrow, or next week, or one month from now." There are a few options. The military could target chemical weapon or other strategic regime targets, establish a no-fly zone, or arm Syrian rebels. Friday, Kerry said: "The primary question is really no longer what do we know — the question is what are we going to do about it?" It appears likely the answer could be cruise missile strikes intended to show the US is serious about backing up its own red lines and international norms.

Politics
Lizzo Campaigns For Joe Biden in Moving Speech: "I Don't Wanna Go Back to the Way It Was"
by Chanel Vargas 6 days ago