The red carpet at Vanity Fair's Oscars party was full of hot couples and great gowns, and the fun continued inside. Cameron Diaz, in orange Victoria Beckham, shared laughs and champagne with pal Kate Hudson, wearing red Versace. Kate arrived on the arm of fiancé Matt Bellamy, while Cameron's rumored guy, Diddy, also went to the bash. Gwyneth Paltrow said hello to Jane Fonda, while nearby, a girlie crew of Paula Patton, Amy Adams, Claire Danes, and Jennifer Westfeldt caught up. Kate Bosworth, who made the rounds in Prabal Gurung, couldn't keep her hands off her boyfriend Michael Polish. 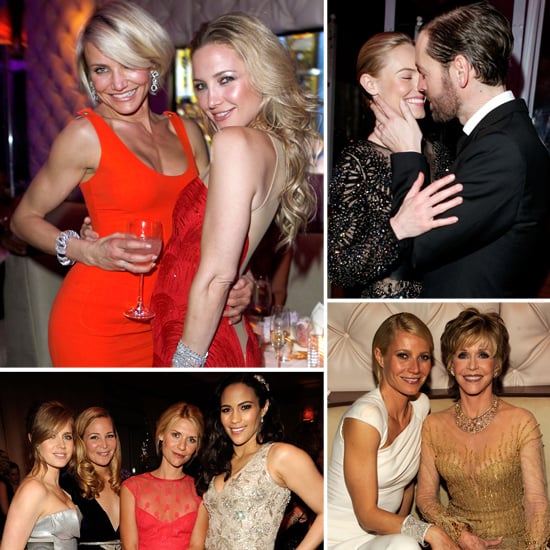 Tom Cruise and an Elie Saab-clad Katie Holmes made the rounds as well. They spent a good chunk of time with their longtime friends Victoria Beckham, in her own design, and David Beckham. Tom and Katie also said hello to a Monique Lhuillier-clad Lily Collins and George Lucas. Love was in the air! Jason Sudeikis and Olivia Wilde watched the Oscars show from the Sunset Tower Hotel, in the company of Jennifer Westfeldt, Jon Hamm, Claire Danes, and Tom Ford. Sofia Coppola also checked out the telecast with Jason, Olivia, and company, and later welcomed her husband Thomas Mars to the fun. Miley Cyrus found a seat to spend quality time with her boyfriend Liam Hemsworth.

To see all the inside Vanity Fair Oscars bash pictures read more.