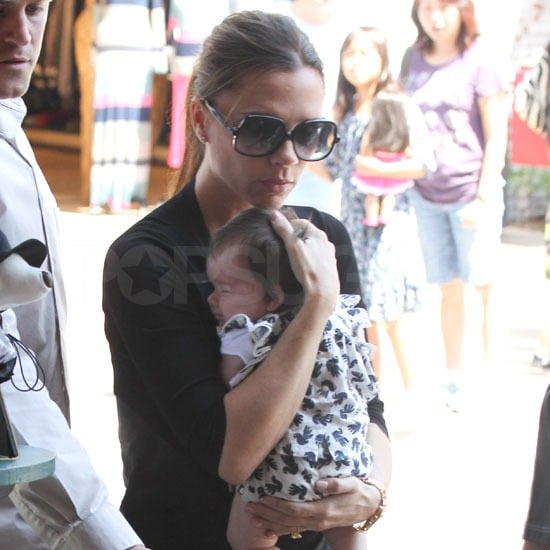 Victoria Beckham packed up the car with the kids and headed to The Grove in LA on Sunday. It was Victoria's second outing with two-month-old Harper in less than a week. Big brothers Romeo, Cruz, and Brooklyn took a break from their daily surfing sessions with David and accompanied the girls on the trip to the mall. The group of five went to the movies then dropped in at the Apple store. Posh also reportedly browsed at the baby boutiques, either shopping for Harper or getting a present for her fellow Spice Girl Mel B's five-day-old daughter. Victoria got more exciting news this morning — she was nominated for a British Fashion Award, with her Victoria Beckham Collection going up against Burberry, Stella McCartney and Tom Ford for designer brand of the year.

David was absent for the latest retail adventure. The dad of four left town in order to play in yesterday's match in Kansas City against their Sporting team. The LA Galaxy tied Kansas 2-2, but David and his squad will have a chance to redeem themselves on Friday when they play at home against the Colorado Rapids. Victoria's missed out on David's most recent games, but Cruz, Romeo, and Brooklyn have cheered for David recently with family friend Gordon Ramsay.