Posh Spice has been a good wife supporting her man during the fabulous World Cup. However, some things are just more important in her eyes than hanging with a bunch of soccer players. Posh had to make an emergency trip home to her hairstylist after pictures were shown of her losing her hair. The Daily Mail reports: 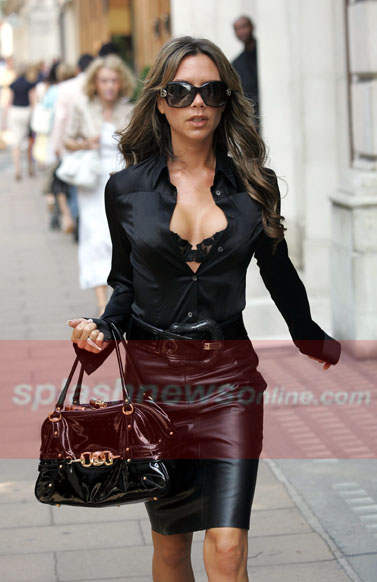 Mrs Beckham, 32, made a desperate phonecall to stylist Seleny Georghiou pleading with her to fly out to Germany to replace her old hair extensions which had been tugging at her natural hair and causing an embarrassing bald spot.

The call came after photographers noticed the bare patch on the top of her head when she flew to Canada for a 24-hours business trip away from the WAGs supporting their partners at the World Cup in Germany.

Sadly, Miss Georghiou, 41, could not make the trip, so Victoria had to come to her - at the Connect Hair System Salon she owns in Chalk Farm. She booked a cheap Ryanair flight immediately and flew the 550-mile round-trip from Baden-Baden to Stanstead in Essex at a cost of some £340.

The appointment took five hours in which time all her old extensions were removed and new ones were put in.

Oh yeah and did we mention she gets her extensions done every three months for a measly $3,000. The fabulous life of Victoria includes extensions made of real hair from all over the world, but mainly Poland, Russia and India. It takes 5 hours to get the extensions done. Who has that kind of time to get their hair done? I must admit, it looks fabulous.