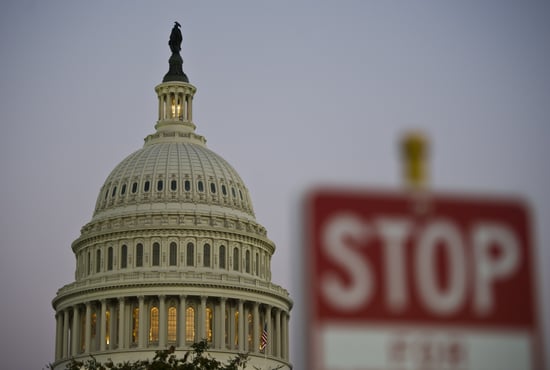 The US Congress failed to pass a spending bill Monday, meaning the federal government will shut down. The Office of Management and Budget issued a memo late Monday night that read: "Unfortunately, we do not have a clear indication that Congress will act in time for the President to sign a Continuing Resolution before the end of the day tomorrow, October 1, 2013. Therefore, agencies should now execute plans for an orderly shutdown due to the absence of appropriations."

The last time this happened, Mariah Carey and Boyz II Men's "One Sweet Day" topped the charts, Seinfeld was the No. 1 show on TV, and Bill Clinton was in the White House. Since you probably don't remember exactly what a government shutdown looks like, here's everything you should know about the latest one.

House Republicans wanted to delay Obamacare in exchange for funding.

Last week, the House of Representatives passed a bill that would defund Obamacare in exchange for funding the government. The Senate, with its Democratic majority, removed the defunding provision and sent a "clean" bill back to the House. This back and forth went on for a while, and as lawmakers played hot potato with the funding bill, President Obama said he would veto any spending bill that targets his signature piece of legislation, the Affordable Care Act (aka Obamacare).

As for voters, while Obamacare is not overwhelmingly popular, most disagree with the Republican tactic of tying government funding to a rollback of health care reform. According to a CBS News/New York Times poll, six in 10 think budget discussions should be left separate from discussions on the health-care law. Republican Senator Susan Collins agrees: "I voted against Obamacare and have repeatedly voted to repeal, reform, and replace it," she said Monday, "but I disagree with the strategy of linking Obamacare with the continuing functioning of government — a strategy that cannot possibly work." In a speech Monday evening ahead of the shutdown President Obama said: "All of this is entirely preventable if the House chooses to do what the Senate is already done, and that is the simple act of funding our government without making extraneous and controversial demands in the process. The same way other congresses have for more than 200 years." Looks like they did not.

The government will shut down Tuesday.

Midnight marked the beginning of the new fiscal year, which has yet to be funded. Nonessential government employees will be able to work four hours tomorrow to prepare for the shutdown. Then they'll have to go home. Each agency has a set of contingency plans in place, and about 800,000 employees in total will be furloughed, which could negatively impact the recovering economy.

Obamacare will continue despite government shutdown.

Oct. 1 also marks the opening of health insurance exchanges under Obamacare, which was passed in 2010 and upheld by the Supreme Court. The exchanges will open as planned — as the law stands now, Obamacare funding is exempt from being impacted by a shutdown.

The last time this happened was 1996.

The house, led by Speaker Newt Gingrich, orchestrated a government shutdown in 1995-1996. It was deemed a political victory for President Clinton, who went on to be easily reelected after voters blamed the Republican lawmakers for the shutdown. According to the CBS/New York Times poll, that could happen again: 44 percent of Americans say they would blame the Republicans in Congress, while 35 percent would blame Obama and the Democrats.

Health, environmental, and cultural services will be stopped.

The 1996 shutdown gives us an idea of what will be halted. Last time, the National Institute of Health stopped taking patients for clinical trials, the CDC stopped its work monitoring disease, the Bureau of Alcohol, Tobacco, and Firearms stopped processing applications for guns, child support and bankruptcy cases were stalled, and the Environmental Protection agency was closed. Also, museums, national parks, and the National Zoo shut down, as they will this time.

The animals at the National Zoo will be OK.

The National Zoo tweeted today: "The animals will be fed & cared for. A #shutdown will not affect our commitment to the safety of our staff & excellence in animal care." Even so, the zoo will be closed to the public, and don't try to get in on the action through the webcams.

The cams (incl. the panda cams) require federal resources, especially staff, to run. They have not been deemed essential during a #shutdown.

Find out why when you keep reading.

Since DC gets much funding from the federal government, programs like the DMV, libraries, and trash collection could stop. In 1995, the city's trash collection stopped for eight days during the shutdown.

Government employees who work in air-traffic control and the military will work as "essential" personnel. In fact, earlier today Congress managed to pass the Pay Our Military Act, which makes sure military members won't have to wait for their paychecks. Mail will continue, and Social Security checks will be delivered.

According to reporters in DC, Congress needed some liquid courage to get through this. Unfortunately, it didn't seem to help bring the two sides together so far.

I'm not over exaggerating when I say I can smell the booze wafting from members as they walk off the floor.

Politics
Alexandria Ocasio-Cortez Calls Out the GOP's Overuse of Her Nickname: "It Conveys a Lot"
by Kelsey Garcia 2 days ago

Politics
The Supreme Court Has Undergone Changes Before; These Are the Latest Proposals
by Kaley Rohlinger 3 days ago