Ashton Kutcher came further under fire today with two new covers about the allegations he cheated on Demi Moore. Ashton quickly denied the rumors the first time around but has stayed quiet for the last two weeks of stories. Star has an exclusive interview with his alleged mistress and images of their supposed text message exchange while People is taking a closer look at the pressure and strain put on their very public relationship. The pair are celebrating their fifth wedding anniversary at the end of this month and so far they're putting up a united front amid the scandal. So tell us, are you starting to believe it could be true or are you holding out hope that the rumors are false? 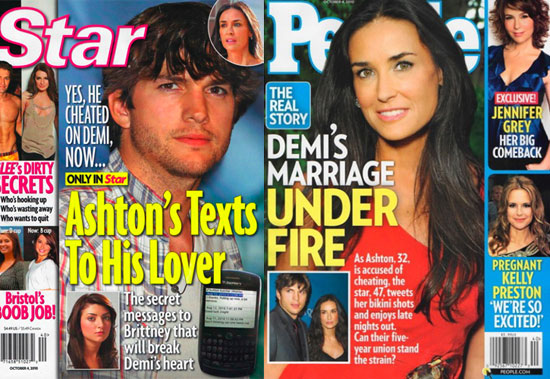 Ashton KutcherDemi Moore
Around The Web

Ashton Kutcher
If You Have Never Seen the Original Punk'd, You Need to Watch It ASAP — Here's How
by Corinne Sullivan 4/10