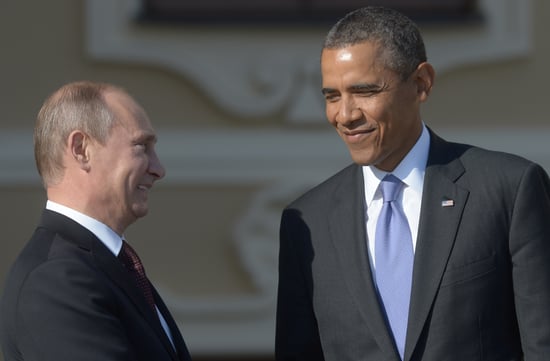 Russian President Valdimir Putin published "A Plea for Caution From Russia" in today's The New York Times, and since the op-ed went online last night, it's received more than 2,240 comments. The Russian leader wants to speak to the American people and their leaders directly about the situation in Syria, and in the well-written if not controversial piece, he argues that the US must go through the UN if it wants to strike Syria and also specifically calls out President Obama for something he said in his Tuesday-night address. Putin is the latest figure in the Syria saga to make his position clear. Everyone from Hillary Clinton and Secretary of State John Kerry to Syrian President Bashar al-Assad himself have spoken out to share their positions. Here is a recap.

On the legality of a strike: "Under current international law, force is permitted only in self-defense or by the decision of the Security Council. Anything else is unacceptable under the United Nations Charter and would constitute an act of aggression."

On the similarities to Iraq: "It is alarming that military intervention in internal conflicts in foreign countries has become commonplace for the United States."

On Obama's case for American exceptionalism: "And I would rather disagree with a case he made on American exceptionalism, stating that the United States' policy is 'what makes America different. It's what makes us exceptional.' It is extremely dangerous to encourage people to see themselves as exceptional, whatever the motivation. . . . We are all different, but when we ask for the Lord's blessings, we must not forget that God created us equal."

On evidence Assad used chemical weapons: "No one doubts that poison gas was used in Syria. But there is every reason to believe it was used not by the Syrian Army, but by opposition forces, to provoke intervention by their powerful foreign patrons, who would be siding with the fundamentalists."

Sept. 10 — President Barack Obama in an Address to American Public

On working on a diplomatic solution: "We will work together in consultation with Russia and China to put forward a resolution at the UN Security Council requiring Assad to give up his chemical weapons and to ultimately destroy them under international control."

On America's role in the world: "America is not the world's policeman. Terrible things happen across the globe, and it is beyond our means to right every wrong, but when with modest effort and risk we can stop children from being gassed to death and thereby make our own children safer over the long run, I believe we should act. That's what makes America different. That's what makes us exceptional. With humility, but with resolve, let us never lose sight of that essential truth."

Sept. 10 — Senate Minority Leader Mitch McConnell on the Floor of the Senate

On early announcements of a Syria strike: "There is absolutely no reason to signal to the enemy when and how, and for how long, you plan to strike them — none. As I've said before, you don't send out a save-the-date card to the enemy."

On contradictions within the plan: "Either we will strike targets that threaten the stability of the regime — something the president says he does not intend to do — or we will execute a strike so narrow as to be a mere demonstration."

On his final verdict: "I will be voting against this resolution — a vital national security risk is clearly not at play."

Keep reading for the timeline of high-profile positions on Syria.

Sept. 9 — President Barack Obama in an Interview With CNN

On possible breakthroughs with Russia's President Putin: "I believe that Mr. Putin does not see the use of chemical weapons as a good thing inside of Syria or anyplace else."

On his message to Assad: "We've been very clear about what we expect, and that is: Do not use chemical weapons . . . We need a political settlement so that you're not slaughtering your own people."

Sept. 9 — President Barack Obama in an Interview With NBC

On Michelle Obama hoping to avoid war: "If you ask somebody — if you ask Michelle, 'Do we want to be involved in another war?' — the answer's no."

Sept. 9 — Former Secretary of State Hillary Clinton in a Speech

On the international responsibility: "This is about protecting both the Syrian people and our friends in the region. The world will have to deal with this threat as swiftly and comprehensively as possible."

On Syria's chance to surrender weapons: "Now if the regime immediately surrendered its stockpiles to international control as was suggested by Secretary Kerry and the Russians, that would be an important step. But this cannot be another excuse for delay or obstruction, and Russia has to support the international community's efforts sincerely or be held to account."

Sept. 9 — Syrian President Bashar al-Assad in an Interview with CBS

On why he's not sure chemical warfare was used: "In the area where they said the government used chemical weapons, we only have videos and we only have pictures and allegations . . . How can you talk about what happened if you don't have evidence?"

On the lack of evidence: "Kerry didn't even present any evidence. He talked 'we have evidence,' and he didn't present anything. Not yet. Nothing so far."

On evidence against the Syrian government: "We know that his regime gave orders to prepare for a chemical attack. We know that they deployed forces and put them in the places where this took place. We know by tracing it physically where the rockets came from and where they landed, and it is no accident that they all came from regime-controlled territory and all landed in opposition-controlled or contested territory."

On how it affects America: "This was not only a direct attack on human dignity, it's a serious threat to our national security."

On his proposed plans: "What we're not talking about is an open-ended intervention. This would not be another Iraq or Afghanistan. There would be no American boots on the ground. Any action we take would be limited, both in time and scope, designed to deter the Syrian government from gassing its own people again and degrade its ability to do so."

On international consequences: "If there are more chemical attacks, we will see an inevitable spike in the flow of refugees — on top of the already two million in the region, possibly pushing Lebanon, Jordan, Turkey, or Iraq past their breaking points."

On the weight of the incident: "This attack is an assault on human dignity. It also presents a serious danger to our national security. It risks making a mockery of the global prohibition on the use of chemical weapons."

On the decision to act: "This menace must be confronted. After careful deliberation, I have decided that the United States should take military action against Syrian regime targets."