Lauren Conrad opens up in this week's issue of Us Weekly about a possible return to reality TV. According to the article, LC is shopping around a new show, which networks are already fighting over. In the past Lauren has said she's only interested in another series if it's on her terms and without the sometimes-fabricated drama of The Hills. 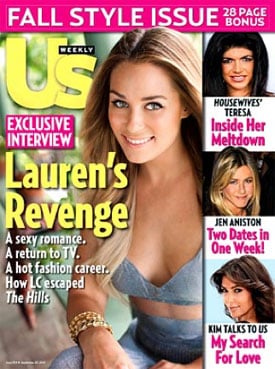 It's been a year and a half since she left the MTV show that made her a household name and since then Lauren has expanded her Kohl's line and become a best-selling author with her LA Candy trilogy. She's also releasing her style book this October and re-launching her Lauren Conrad clothing collection. She gives us peeks at her personal life with cute twitpics, but still keeps her long-term relationship with boyfriend Kyle Howard very private. That probably wouldn't change with another small screen venture, but tell us — would you be excited to see Lauren Conrad back on reality TV?