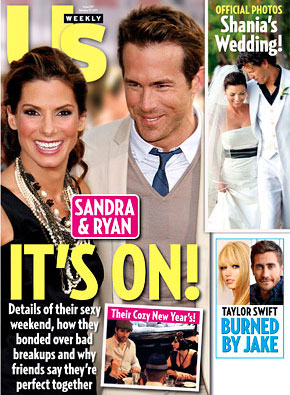 Ryan Reynolds and Sandra Bullock are old friends who are both single again after splitting from their respective spouses, Scarlett Johansson and Jesse James, last year. The costars from The Proposal were photographed spending New Year's together at her restaurant in Austin, with sources claiming the duo looked "hot" and touched each other during conversation. We're not sure that their celebration necessarily means romance, but we'd like to know what you make of the speculation that Ryan and Sandra are more than friends. So, tell us— would you be happy if the Ryan and Sandra rumors were true?