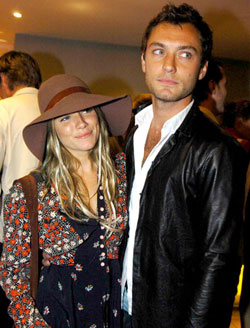 Jude Law has his hands full dealing with the birth of his newest child Sophia and appearing nightly on Broadway in Hamlet, but he's rumored to also be spending time with a familiar face: Sienna Miller. She's also in NYC performing in After Miss Julie, and their reps confirmed that they've met up a few times while in the city. Both Sienna and Jude have weathered their fair share of controversy since their relationship finally ended a few years ago, and it seems entirely possible that they could come full circle to find themselves back together. So, tell us what you think — would you support a Sienna and Jude reunion?