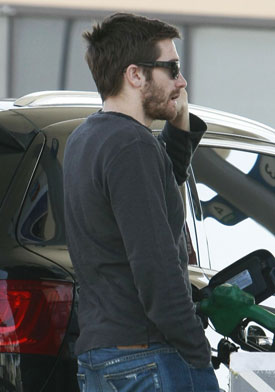 Jake Gyllenhaal and Reese Witherspoon called it quits back in December, and it seems like they're each starting to move on. He stopped to gas up his car yesterday in LA, but Jake has also been busy spending time with family and making the party rounds, including one Golden Globes bash where he apparently chatted up Jennifer Aniston.

Reese, meanwhile, has evidently gone on a date — she was spotted out with CAA agent Jim Toth. They grabbed dinner at the Santa Monica restaurant Locanda Portofino, hugging good-bye afterwards. Reese and Jake had a good run, but they just might be on the road to getting over each other. So, tell us — are you happy to see Jake and Reese moving on?