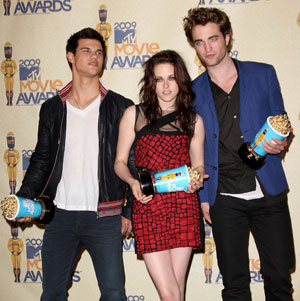 Robert Pattinson and Kristen Stewart are in LA now gearing up for their many New Moon press appearances, and things kick off tonight with MTV's "Ulalume" special at 9 p.m. The program, which was taped a week ago, is set to include musical appearances from bands on the film's popular soundtrack and clips from Nikki Reed, Kellan Lutz, and Ashley Greene. Robert, Kristen, and Taylor Lautner will also make cameos introducing a new 20-second clip from their movie. So, tell us — will you tune in this evening?