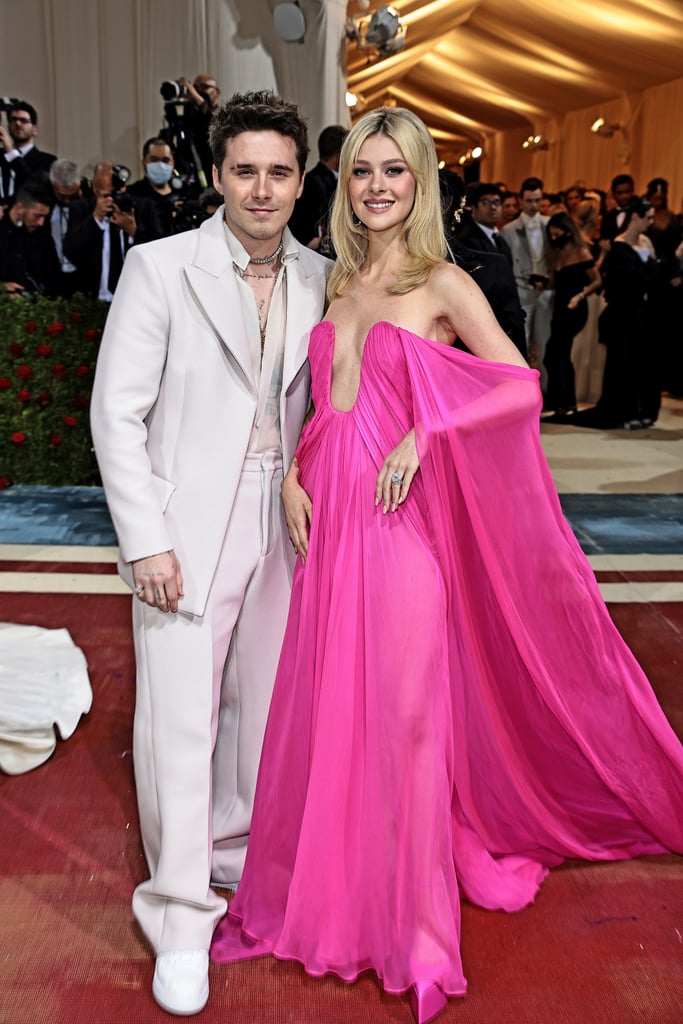 Brooklyn and Nicola Peltz Beckham brought their newlywed glow to the Met Gala. Just three weeks after tying the knot in Palm Beach, FL, the duo hit up the star-studded ball on May 2, marking their first red carpet appearance since becoming Mr. and Mrs. Although they didn't quite adhere to this year's "Gilded Glamour" theme, they looked incredible, nevertheless — Nicola wore a hot-pink Valentino gown with a plunging neckline and sheer sleeves, while Brooklyn opted for a muted off-white suit and sheer top, allowing his wife to command the spotlight. Both also wore their matching diamond wedding bands.

After first confirming their relationship in January 2020, the Peltz Beckhams made their public debut as a couple at a Saint Laurent runway show during Paris Fashion Week in February 2020. Since then, they've shown plenty of PDA all over Instagram, and they also attended last year's Met Gala together — in pretty similar outfits to the ones they chose this year, might we add. Perhaps they're starting a trend of only wearing pink and neutrals to the annual fashion event?

Read ahead to see the newly married duo smiling from ear to ear on the Met Gala red carpet, and then catch up on the other celebrity couples that made us swoon at the gathering, from Blake Lively and Ryan Reynolds to Jodie Turner-Smith and Joshua Jackson.

Tommy Dorfman
Tommy Dorfman Is Engaged to a Mystery Woman: "Being in Love Is So Scary"
by Yerin Kim 16 hours ago