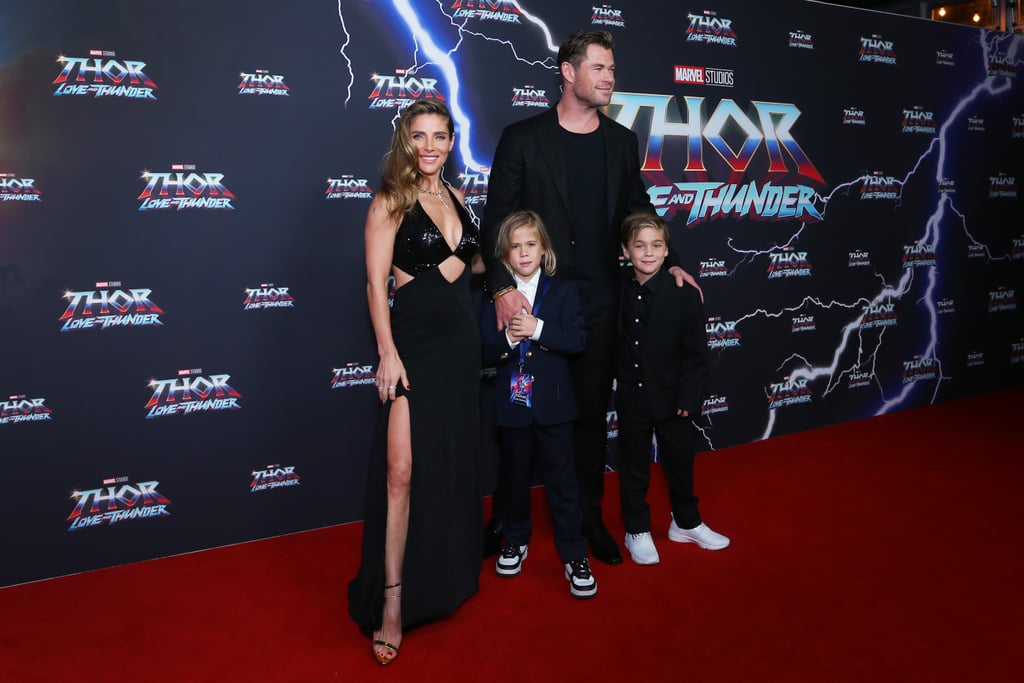 Chris Hemsworth brought his family along for the "Thor: Love and Thunder" premiere in Sydney, Australia on June 27. The star and his wife, Elsa Pataky, walked the red carpet with their twins, Sasha and Tristan.

Hemsworth stars in "Thor: Love and Thunder" alongside Natalie Portman, Christian Bale, Taika Waititi, Tessa Thompson, and his brother Luke Hemsworth. The film is the sequel to 2018's "Thor: Ragnarok," and follows Thor on his quest to stop villain Gorr the God Butcher, played by Bale, from destroying all the gods. The movie will be in theaters on July 8.

As it turns out, two of Chris Hemsworth's three kids have cameos in "Thor: Love and Thunder," the actor told Kevin McCarthy on June 27. Hemsworth shared that one of his 8-year-old twins plays a young version of Thor in the film while his 10-year-old daughter, India, has a small role as a character named Love. Later in the interview, he added that Portman's, Bale's, and Waititi's children also appear in the film.

Hemsworth and Pataky were married in December 2010, and their first child, India, was born in May 2012. Shortly after they were married, Hemsworth's career blew up when he starred in "Thor" in 2011. Pataky, an actor and model known for her role as Elena Neves in the Fast & Furious franchise, recently starred in the film "Interceptor," which was released in May 2022.

Hemsworth and his family currently live in his native Australia. "He makes me laugh every day, like in all-day situations and everything," Pataky told Access Hollywood on May 23 when asked what's made their marriage work over the years.

See photos from their family night out ahead.

Celebrity News
The Try Guys Drama Continues: All You Need to Know About Ned Fulmer
by Pallavi Bhadu 1 hour ago

Celebrity News
Barack Obama Celebrates 30 Years With Michelle Obama: "I Won the Lottery That Day"
by Chanel Vargas 2 hours ago

by Perri Konecky 1 minute ago