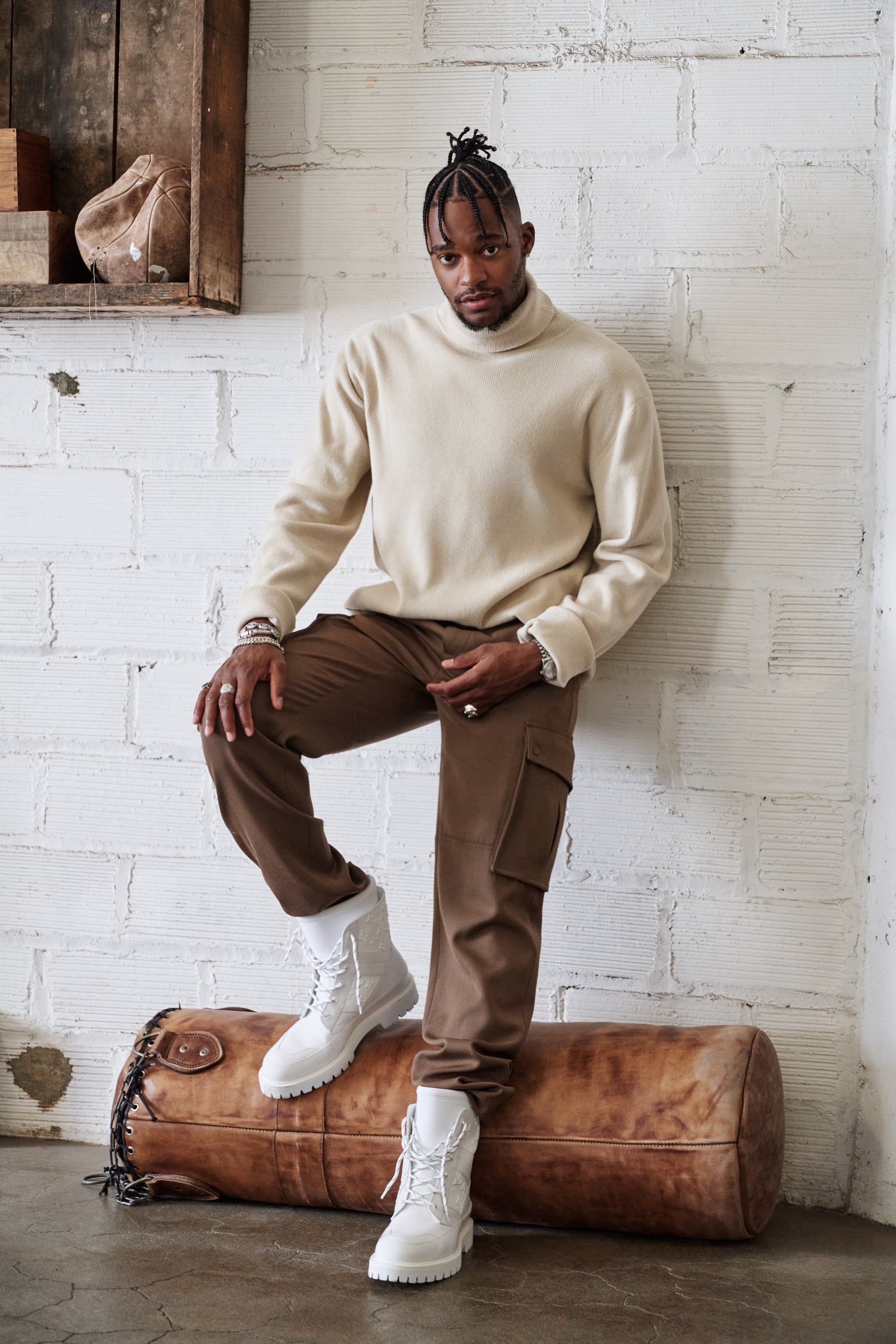 In our Q&A series POPSUGAR Crush, we get to know some of our favorite celebs' more intimate details — from their first celebrity crush to the best love advice they've ever received. This month, we're crushing on The Sex Lives of College Girls's Christopher Meyer.

The premiere of The Sex Lives of College Girls is upon us, and Christopher Meyer has been dreaming about this moment for years. The 25-year-old actor plays Canaan, Kimberly's (Pauline Chalamet) funny coworker from the coffee shop who eventually becomes her man confidant. Christopher appreciates how his character evolves throughout the season and becomes someone Kimberly can come to for guy help. "Of course, in the first episode, I'm f*cking with her the whole time," he told POPSUGAR. "Making fun of her circumstances, but it's just because we didn't know each other. Then she showed her true colors at the end of the episode when she stuck up for me. At that point, Canaan considers her as a friend and vice versa."

Being a part of a show like The Sex Lives of College Girls was a much different experience than Christopher is used to — the "complete opposite," he said truthfully. "Everything I've ever worked on has always just been predominantly dudes, and a lot of stories told from male perspectives," he said. "This is the first time I've been on a show with this many women and this many female personalities, but it's not too different. Everybody's professional [and] trying to get the best out of each take. But it's interesting. I just sit back and watch."

"I never imagined being on a show that would be revolving around the sex lives of four women."

The series, cocreated by Mindy Kaling and writer/producer Justin Noble, follows the lives of four young women — Kimberly, Bela (Amrit Kaur), Leighton (Reneé Rapp), and Whitney (Alyah Chanelle Scott) — at a prestigious New England college. The foursome navigate love, life, and friendship during their freshman year. The show's "almost entirely female" team of writers — from all different ages and walks of life — make the show so special. "It's fire, honestly. It's such a good group," Christopher said. "I never imagined being on a show that would be revolving around the sex lives of four women. I knew that could possibly be a lane I could occupy, but I didn't think that I would be a series regular on a kind of show like that. But it's really interesting and honestly such an amazing experience, in a way, being led by four women and it being a predominantly female show."

Though it's way too early to make season two predictions — the show hasn't been renewed yet — Christopher hopes that fans will eventually get a chance to see much more from his character — outside of the coffee shop. "I would love to see my character become passionate about something," he said. "Obviously, the four girls, we all know what they're in school for. I think I'd probably just want that to become clear for Canaan as well. I'm sure the show is going to get to a point where it's like, all right, all of this dating stuff is cool but real life is a thing, too. Graduating college and whatever happens after. I guess I'd want to see that manifest for Canaan, see really who he is and what he's trying to do with his life."

All in all, Christopher is having fun with this new role — especially now that he's gotten more comfortable saying the show's title out loud. "At first it was funny because I didn't even realize that this would be uncomfortable until that question was asked," he said. "I was just looking at it as the name of the project I'm on from an artistic standpoint. So when people started to ask the question, I'd be like, oh sh*t. I have to say The Sex Lives of College Girls right now. But now I definitely say it unapologetically."

Check out the rest of Christopher's POPSUGAR Crush interview ahead, and be sure to check out The Sex Lives of College Girls shamelessly on HBO Max.

Related:
Exactly How Old Are the Sex Lives of College Girls Cast? We've Done Some Sleuthing

I would probably say Alicia Keys truthfully. I actually remember she came on 106 & Park when I was 5 years old, and I think I started crying. I loved Alicia Keys so much.

I don't even know if I can give this away, but definitely Chanel. I go Chanel and Tom Ford. I can't give away any more.

I'm not really a coffee person, [more of] a tea person. I love green tea; it's just straight to the point.

Do you cook? If so, what's your favorite thing to make?

From time to time, not often though. I'll bust [out] some chicken tacos and steak tacos here and there. I can whip up some spaghetti and meatballs, too. Very basic.

Do you use pickup lines? If so, what's your favorite?

I don't use pickup lines, but I definitely used to when I was younger, and they all came from The Fresh Prince of Bel-Air.

Blue heart, that's just what I go to.

It's funny because, obviously as a dude, I've never been taken out on a date. I'm usually the one taking people out. So I usually go for something chill for the first time. I have done something crazy though. I would say my best first date was with this girl I met at the gym. I have a professional boxer homie, and I asked him if I could have the boxing gym after hours. He let me go in there at nighttime, and I had dinner set up in the boxing ring. We boxed, we laughed and played around, and then we had dinner. That was probably the best first date I ever did. 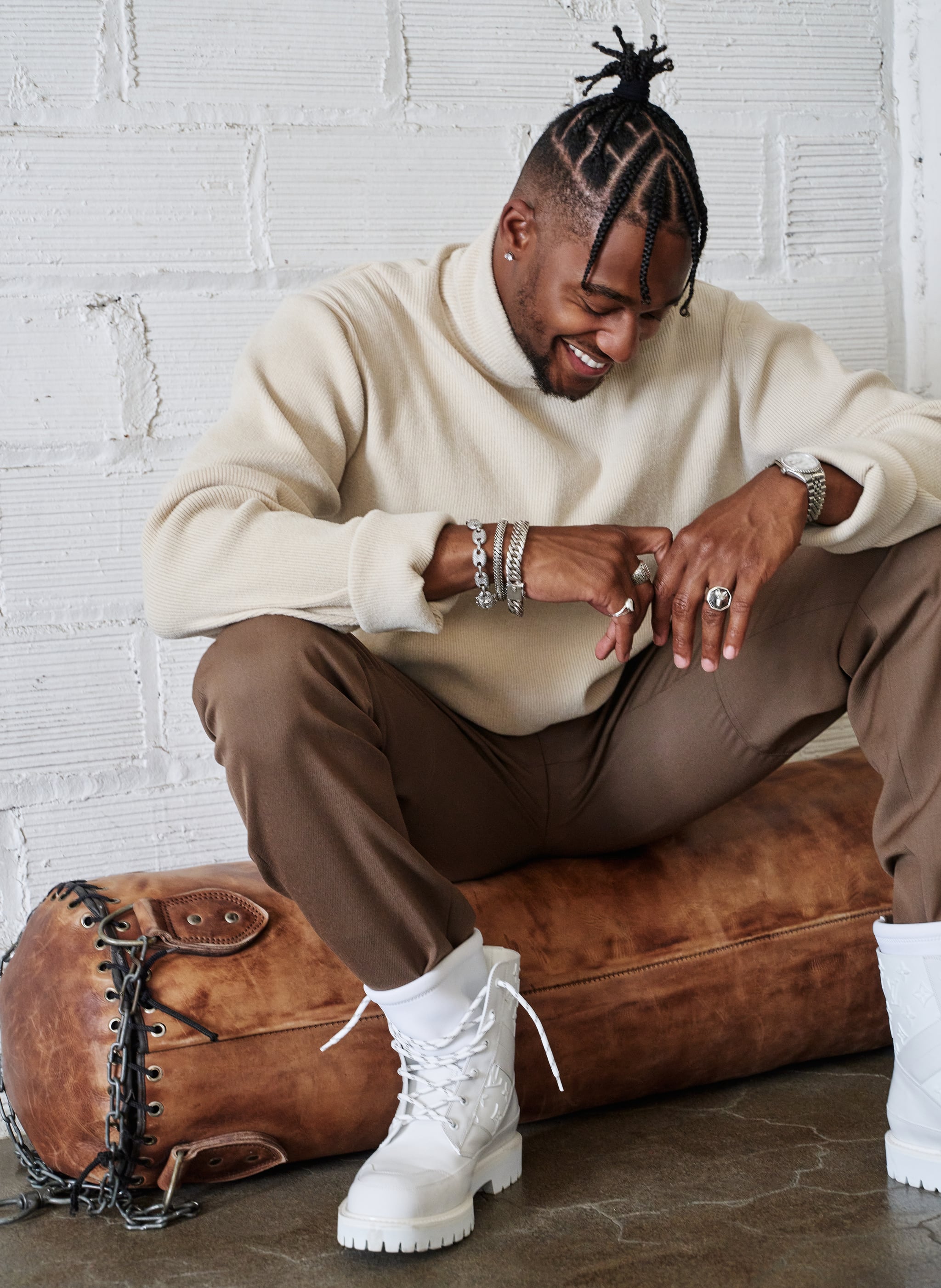 I would say scary movies, just for the cuddling factor of it all, for the mood. I try not to go to romantic movies. I have put on 50 First Dates before a couple times, but usually horror movies just because they're fun, exciting, and they keep you up.

My biggest turn-on would have to be two categories. Physically, it's hygiene and maintenance. I'm a very clean person. I take two, three showers a day, sometimes for no reason. I like being clean, and I like women who are very attentive to their nails, feet, and teeth. That's a big turn-on for me. Biggest turn-on mentally, I like to date women that have a passion in something. It could be anything because I'm a very passionate person, [especially] about my career. I just don't see myself ever working out with anybody who doesn't have a career they're passionate about, or if I don't even see a desire to find a passion. Shoot, that's probably my biggest turnoff, too. Truthfully, just no ambition or desire for self-betterment.

What's the best trip you've ever been on?

Earlier this year, I went to Mexico — Tulum. Everybody was there. Tulum is the new Miami for real. One of my homegirls had a birthday, and she invited a bunch of friends. I was out there for five days, two days extra than I was supposed to be, because one of my homies lost his passport. He couldn't get back, so I just stayed back with him and another homie, and we slid to Cancn real quick. But it was fun. We had a crazy Airbnb, an indoor pool. It was a vibe.

What's the most romantic thing you've ever done?

I had a girlfriend a couple years ago. She had never been to California, so I flew her out. There's this place in Malibu that's a secluded beach area, not too many people know about it. To the point where one time I saw JAY-Z and Beyoncé there. The beach is [also] right next to this giant cliff. So before she landed, I went to Ralphs and grabbed a bunch of firewood, glow sticks, and LED lights. I lit the whole entire side of the cliff up pink and purple because those are her favorite colors, and then I set up a bonfire. I Ubered her all the way over so she didn't know where she was going or what was happening, and with the glow sticks, I lit up the path for her to find me. So she follows the glow sticks and then, boom, she sees the whole thing. I had music out there, my guitar. It was a whole thing.

One of my exes got me a Louis Vuitton sweater that I still wear very frequently.

Know when you're ready and be honest and stern in that. A lot of times, in our generation, we crave love or the idea of love based on what we see on the internet and in movies. It makes us jump for it when it's not the right time. I think with love, timing is everything, and that timing has nothing to do with the other person. It's all about yours. A lot of people don't stop to ask themselves, "Are you ready to take on everything that comes with being in a fully committed relationship?" We just go off of our feeling. What I'm learning to do is ask myself and see where I'm at emotionally before I hop into things with people.