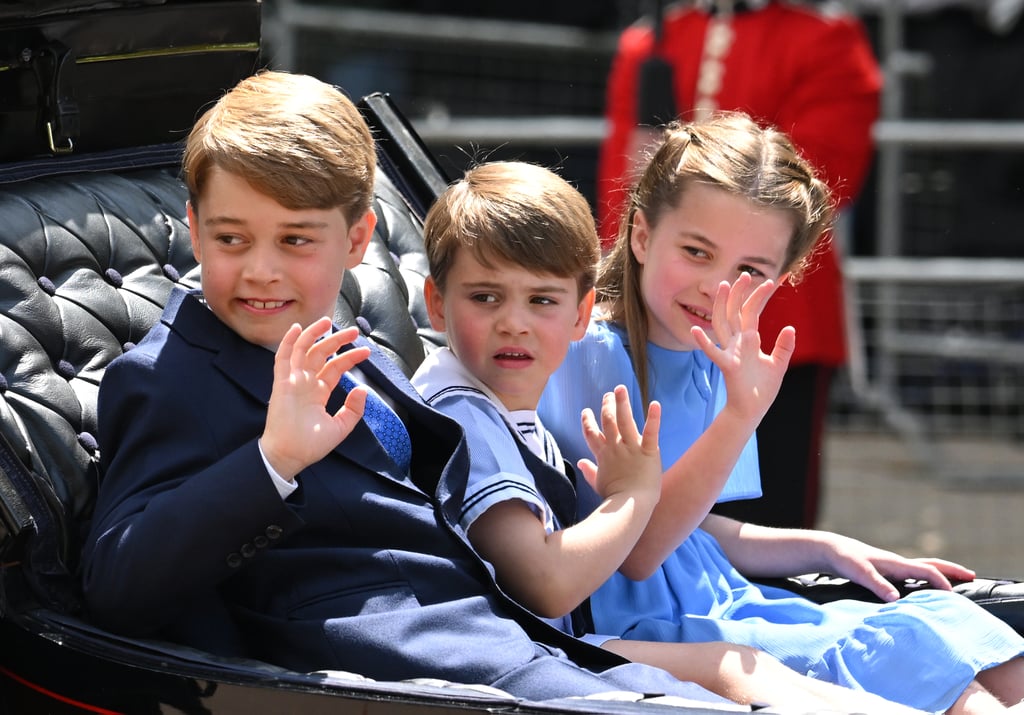 Prince George, Princess Charlotte, and Prince Louis have checked off another royal milestone! On June 2, the Cambridge kids made their carriage-ride debut at Trooping the Colour, the annual military parade for Queen Elizabeth II's birthday that also marks her Platinum Jubilee this year.

The siblings all rode together in their horse-drawn carriage with their mother, Kate Middleton, and Prince Charles's wife, Camilla, Duchess of Cornwall. The young royals showed off their best waves to the thousands of folks who lined the streets of London. The children's father, Prince William, participated in the procession with them by riding on horseback wearing his full military uniform.

In addition to their carriage ride, the kids also watched the parade from the Buckingham Palace balcony, alongside the queen and their parents. Prince Louis made a moment of his balcony appearance with his meme-worthy reaction to the noise below, covering his ears with an upset look on his face.

Though this is the first time the Cambridge children have taken part in the parade's carriage procession, they're no strangers to Trooping the Colour. George and Charlotte made their first balcony appearances at the palace in 2015 and 2016, respectively, while Louis made his in 2019. All three kids also watched the Royal Air Force flyby from the balcony in 2019.

Prince Harry and Meghan Markle also made a big splash at Platinum Jubilee this year, marking their joint return to Britain with their two children, Archie and Lilibet Mountbatten-Windsor. The Duke and Duchess of Sussex did not appear on the Buckingham Palace balcony or participate in the carriage ride for Trooping the Colour, but they did attend the event. The couple and their kids are expected to attend a number of events throughout the rest of the Platinum Jubilee celebration.

Ahead, check out all the photos from the Cambridge children's 2022 Trooping the Colour appearance.